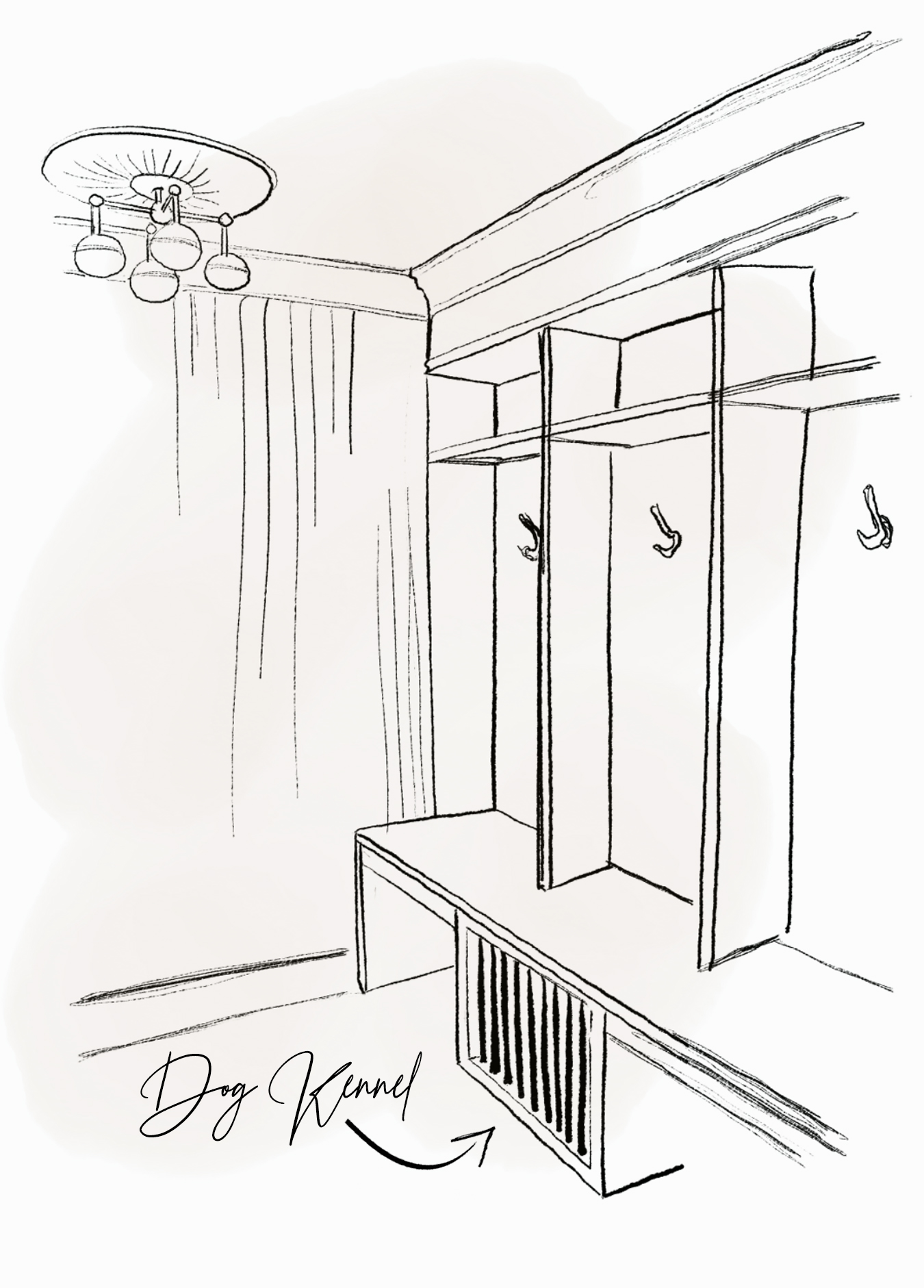 Welcome to Week Six!!  I am going to share two space updates this week the Mudroom & the Bathroom.  Today we are focusing on the Mudroom… otherwise known as the huge closet! 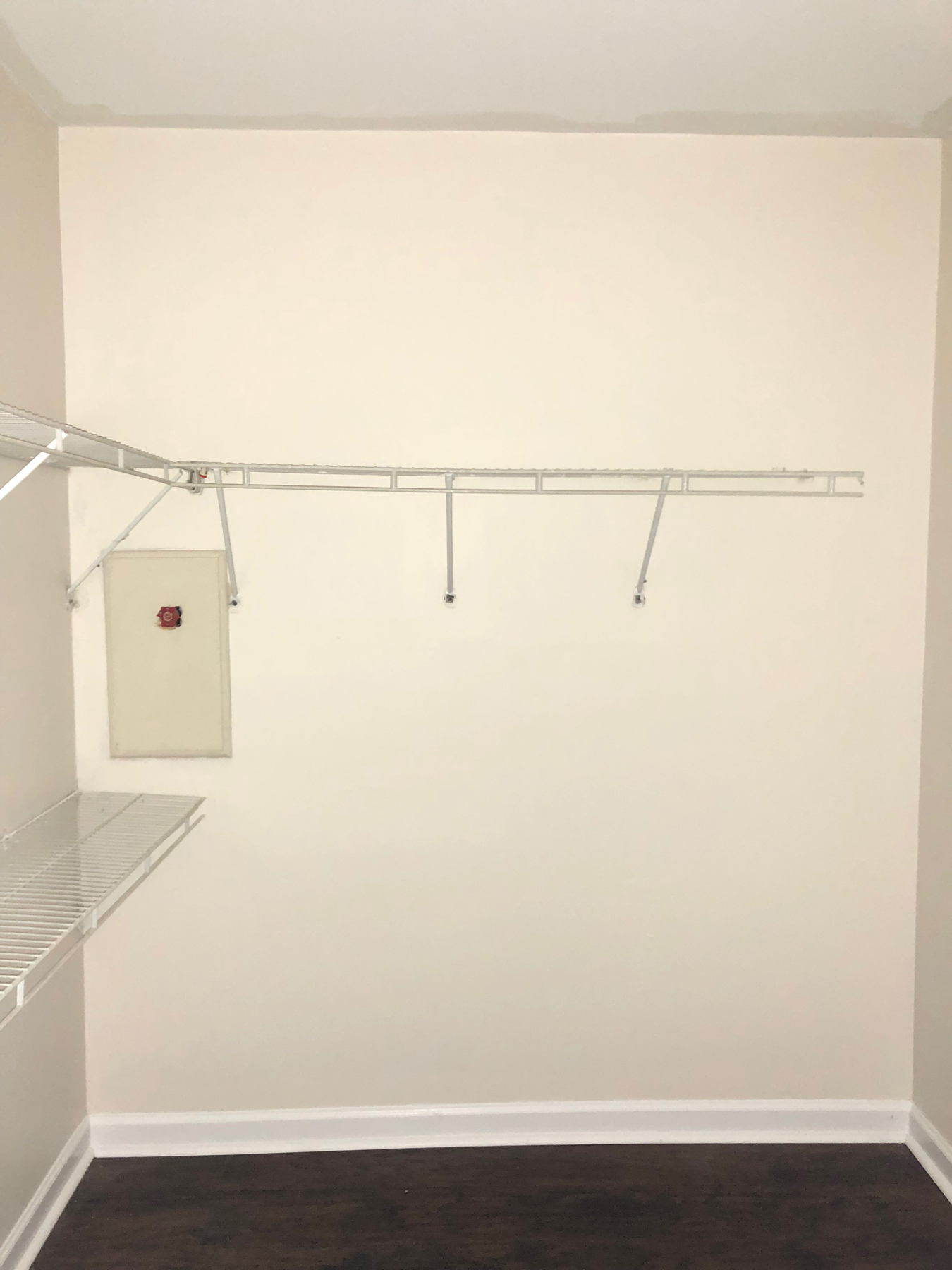 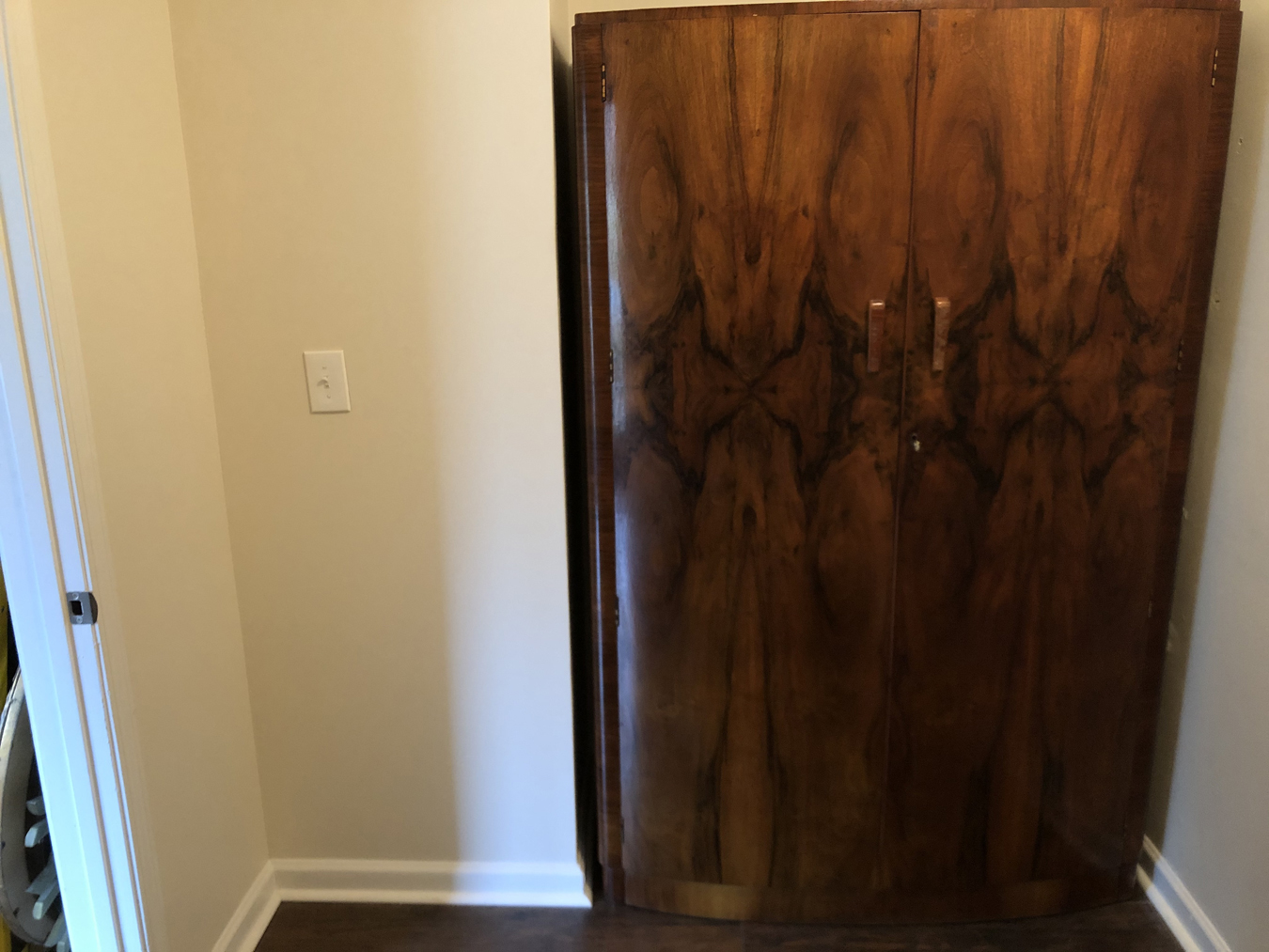 Initially when we moved into the house we were thrilled to have a giant closet!!  After leaving a home with only two 3’x5′ closets this space felt massive.   Think of all of the storage we could utilize!!!  Fast forward to a few months later and we quickly realized it became the place where everything was shoved.  There was zero sense of purpose besides becoming an avalanche hazard every time the door opened.  One of the most important lessons I learned as a designer & a homeowner from our last home (which was 954 sq. ft.) was that every space needed a specific purpose.  Including closets… especially closets!    So I started to make a list of the needs of our family and this area of the home.

1.  Coat Closet // For our coats as well as my husband’s suit jackets.
2.  Landing Spot // A space for keys, purses, backpacks, shoes to land.
3.  Dog Kennel // Our one year old dog Poppy is Kennel trained and we needed a place to put her kennel for when we leave the house.

The idea of turning this space into a mudroom vs. catchall seemed to fit our needs as a family better.  So I started to plan.

Our Coat Closet need was instantly checked off once I found this vintage figured walnut Armoire on Craigslist.  It has tons of storage space for our coats/suit jackets & even has a shelf inside for our hats.  Plus, the piece fits almost exactly into this little nook in the room. 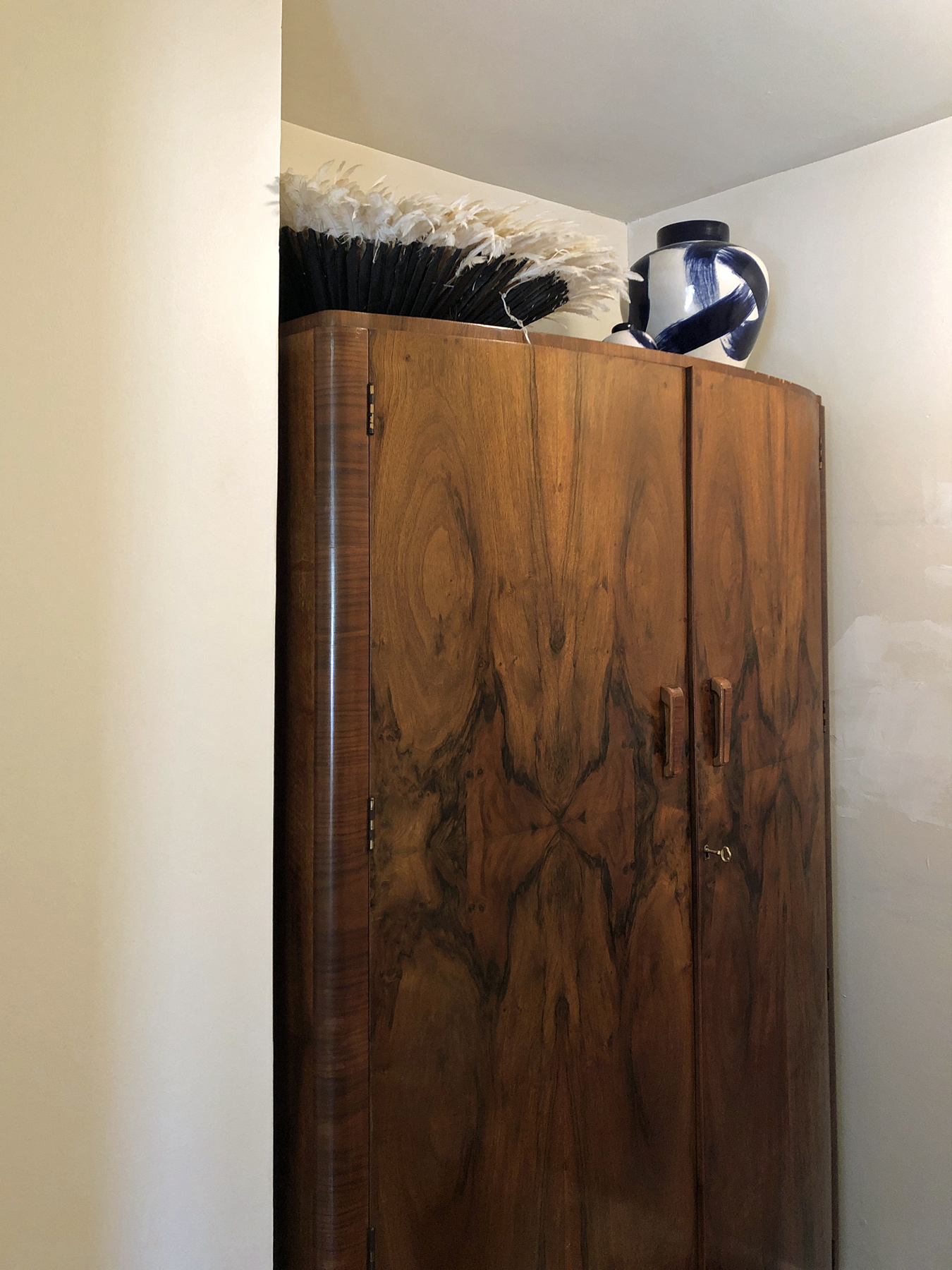 We also installed a new light fixture to replace the generic boob light.  This one coordinates with the large chandelier in the main space.  It is the Flushmount version of the Boca Fixture from Hudson Valley Light Group. 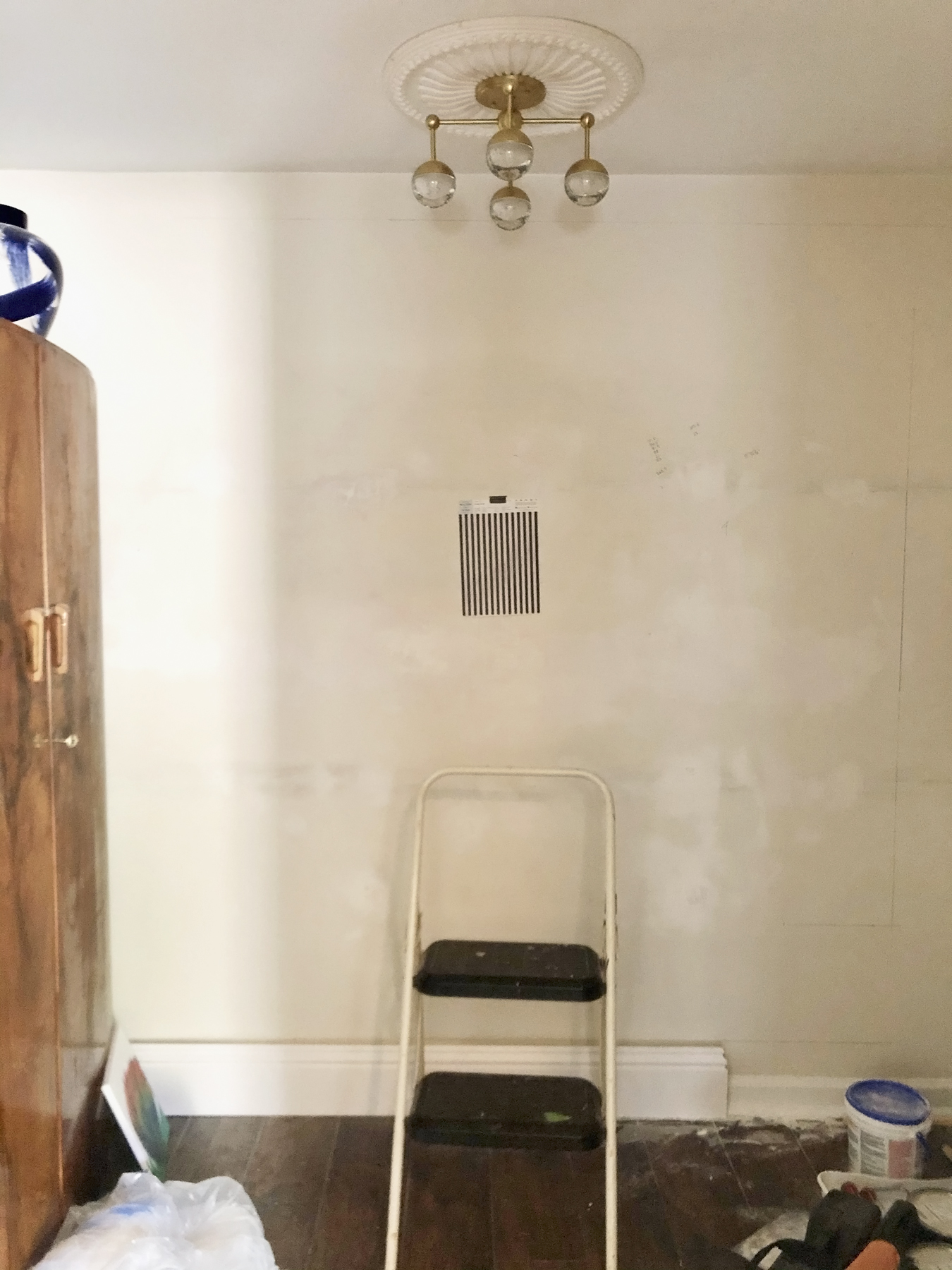 I originally envisioned the main room to be dark and moody, but that ended up going white and bright.  So that change altered my original plan for this space as well.  I had already ordered wallpaper that I had intended on using for the back of the cubbies, but now I had a different thought.  What if I wallpapered the room instead?!  The question was, did I have enough wallpaper?!  I measured three times and scribbled down my answer.  Then I had my mom (who lives in our carriage house) come over and measure just to be sure we came up with the same answer… If I didn’t mess ANYTHING up, I should have JUST enough wallpaper to do the walls.  So I went for it.

I prepped my uneven walls with some drywall compound to level out the low spots.  Even if I was going to paint the walls, I would have had to do this step.  This is something I have never had to do before, but as this space was an intended utility closet, there was not much care given to the drywall installation in here.  So after a few layers of joint compound and lots of sanding later the walls were ready for some stripes!!

I ordered two rolls of wallpaper from one of our ORC Sponsors, Milton & King.  They have some beautiful patterns that can be made into wallpaper or fabric!  More on that later!!  The pattern I choose was a narrow black and white stripe called Candy Stripe.  I loved that it added a bit of fun, but was still a classic choice that played beautifully with the armoire.  To install I used my favorite Strippable wallpaper paste and got to work!  Fortunately this pattern has no repeat, so I was able to use every inch of the paper!! 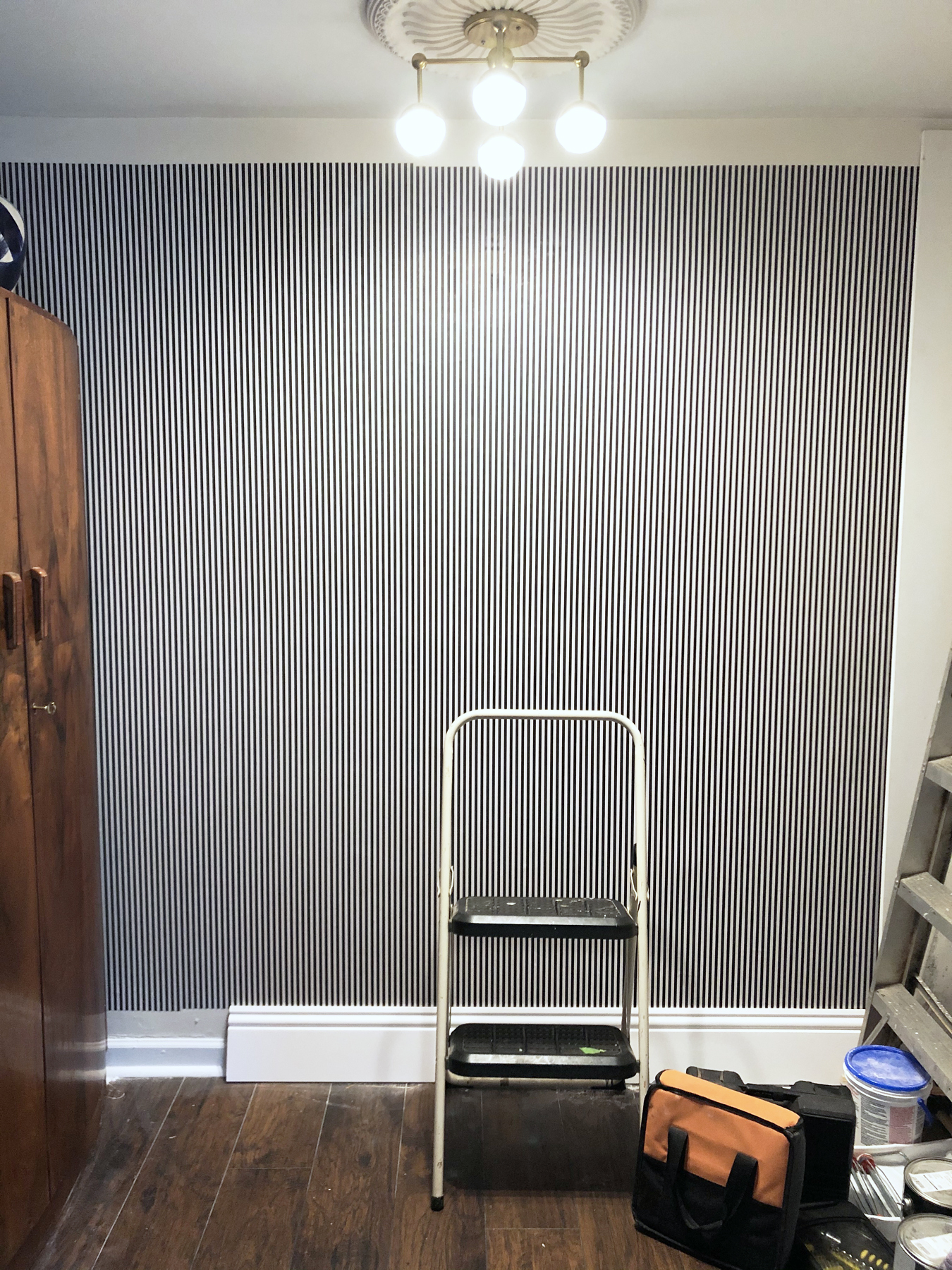 It is a little hard to read in these install pics.  And a little dizzying, but definitely not in person.  I did notice that on the walls where the pattern is broken up by the armoire or the door frame, it reads better.  All of which is fine, because I have something else planned for this main wall that will help to break up the stripes. 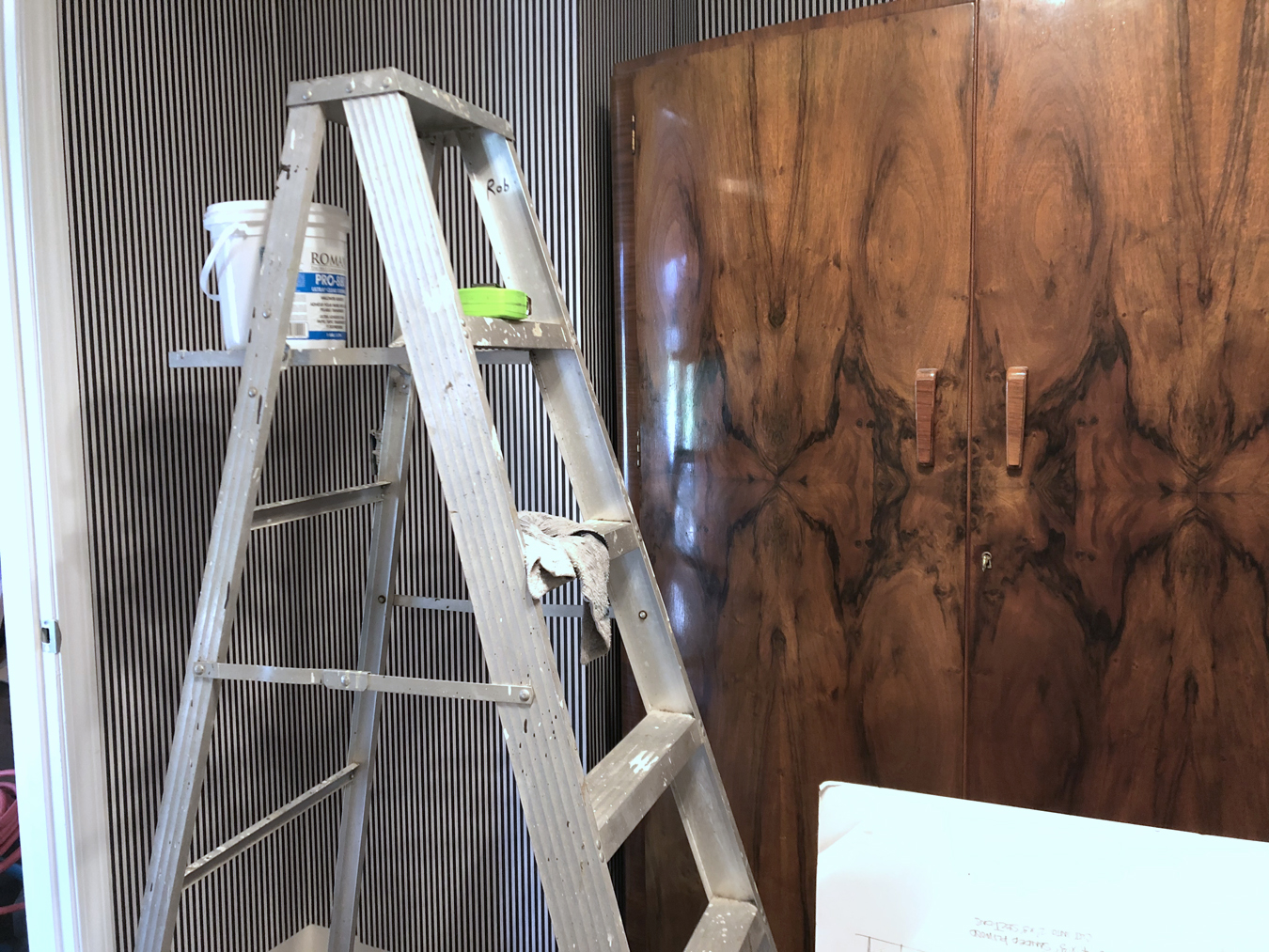 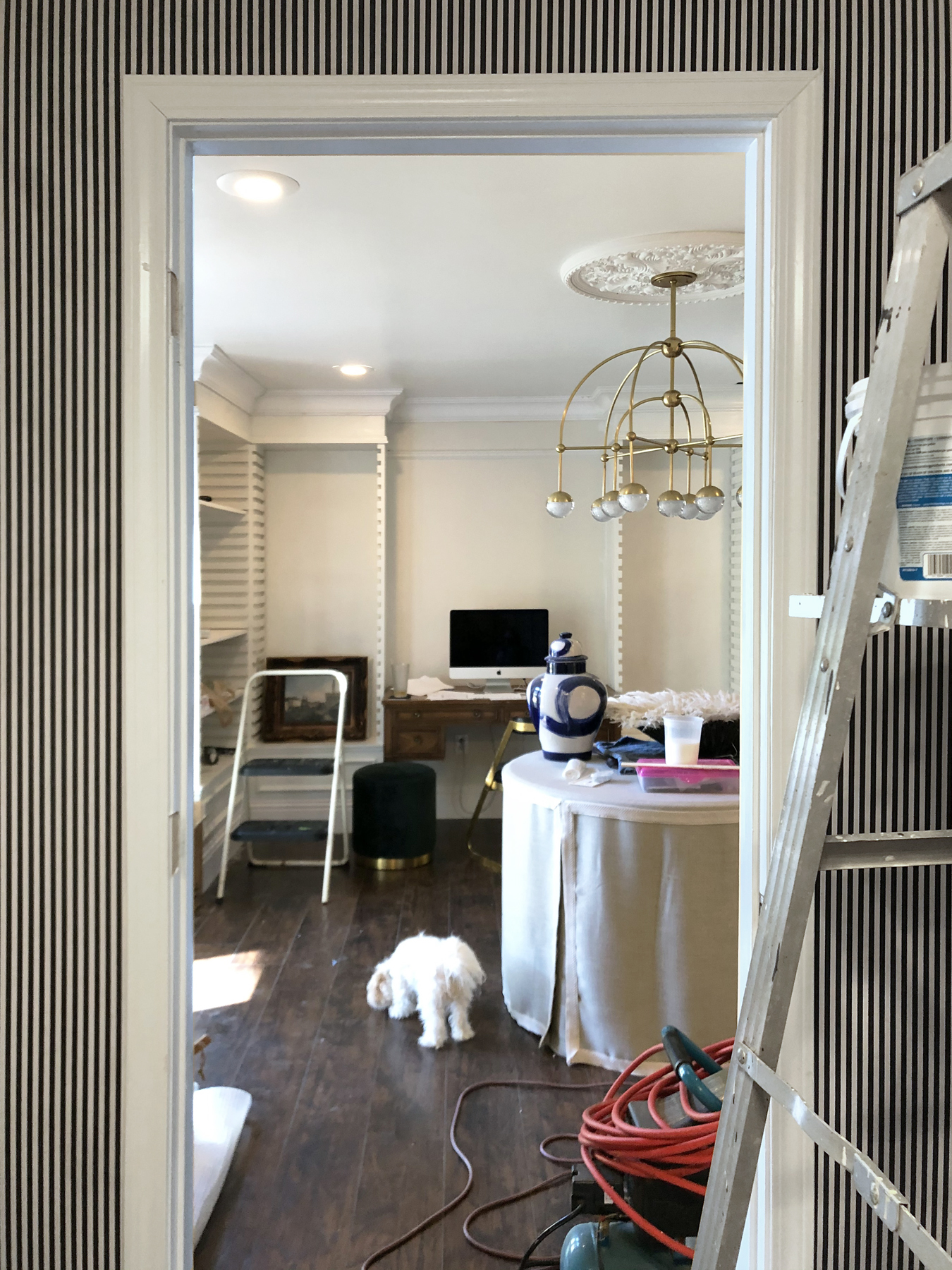 I finished with a 6″x 24″ strip of waste!!!  I still can’t believe I had enough, albeit just enough.  Now this space had some major visual interest from the main room.  The two spaces feel cohesive, but not match-y.  Now it was time to tackle the cubbies.  This was another exercise in using every scrap of lumber/moulding we had on hand. 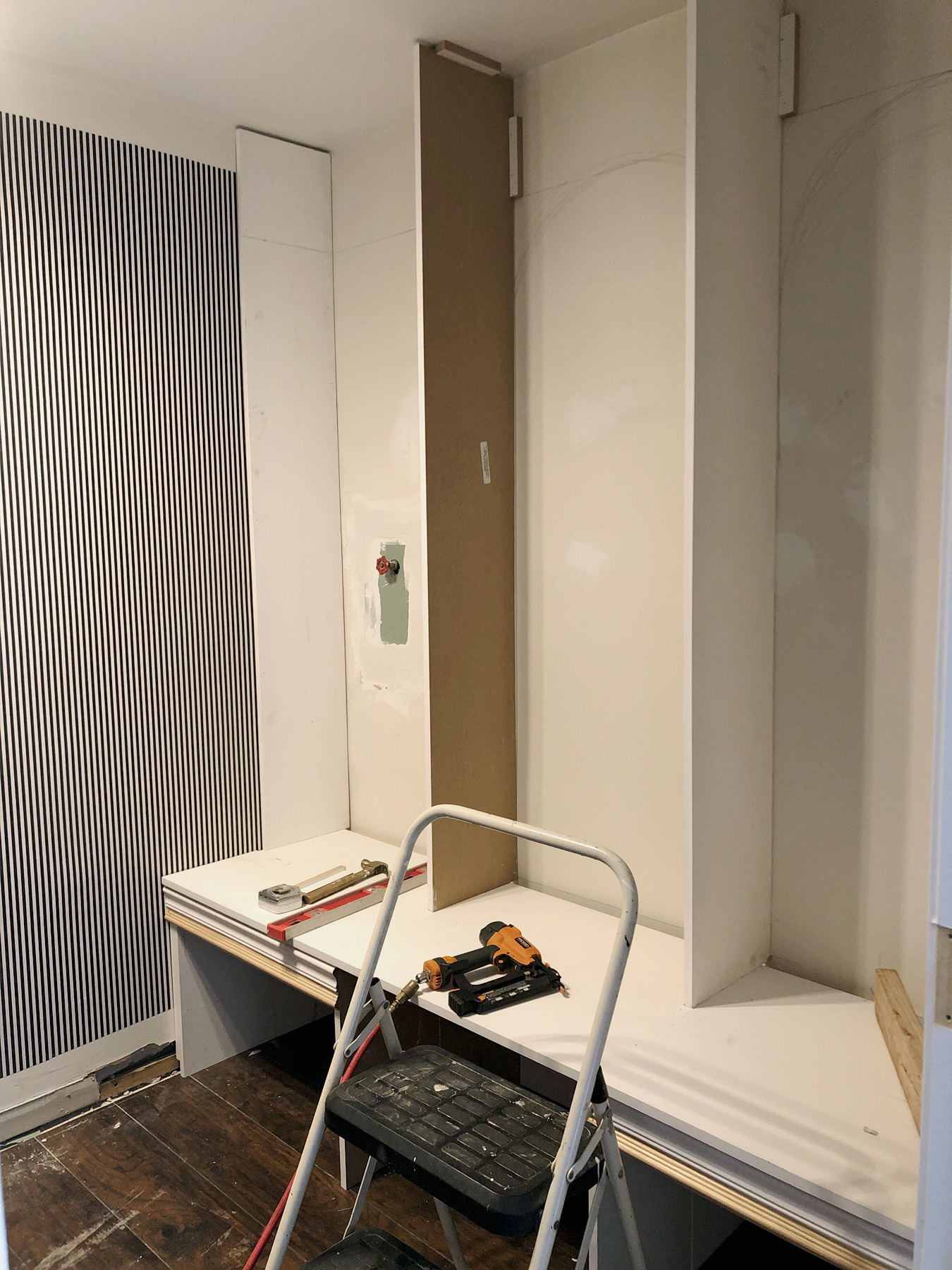 I decided on three main vertical compartments, one for each member of our family.  These would have hooks for a coat or backpack, a small shelf above and a larger opening below for baskets and a surprise for our puppy. 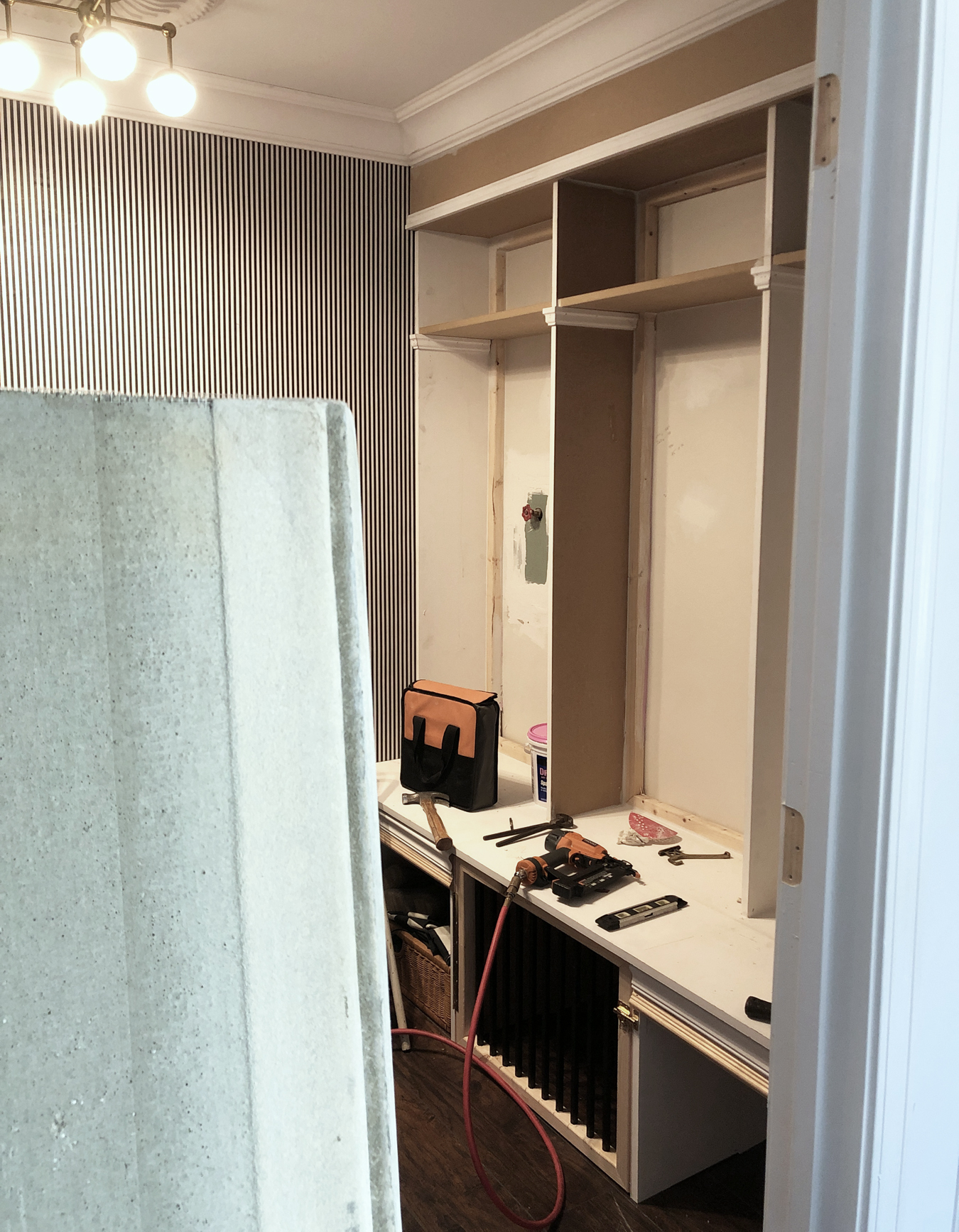 We made her a swanky new kennel!  I used some leftover 1×1 boards and a few of the LJ Smith hollow metal stair baluster rods we used for our stair makeover.  They were the perfect scale and having just worked with them, I knew that cutting them to size would be pretty easy.  I also ordered the coordinating Candy Stripe fabric from Milton & King to use for her new bed.  The pattern is identical, and I was able to choose which fabric I wanted to have it printed on.  I choose Arizona as my ground as it was a more durable option that can be washed, for obvious reasons. 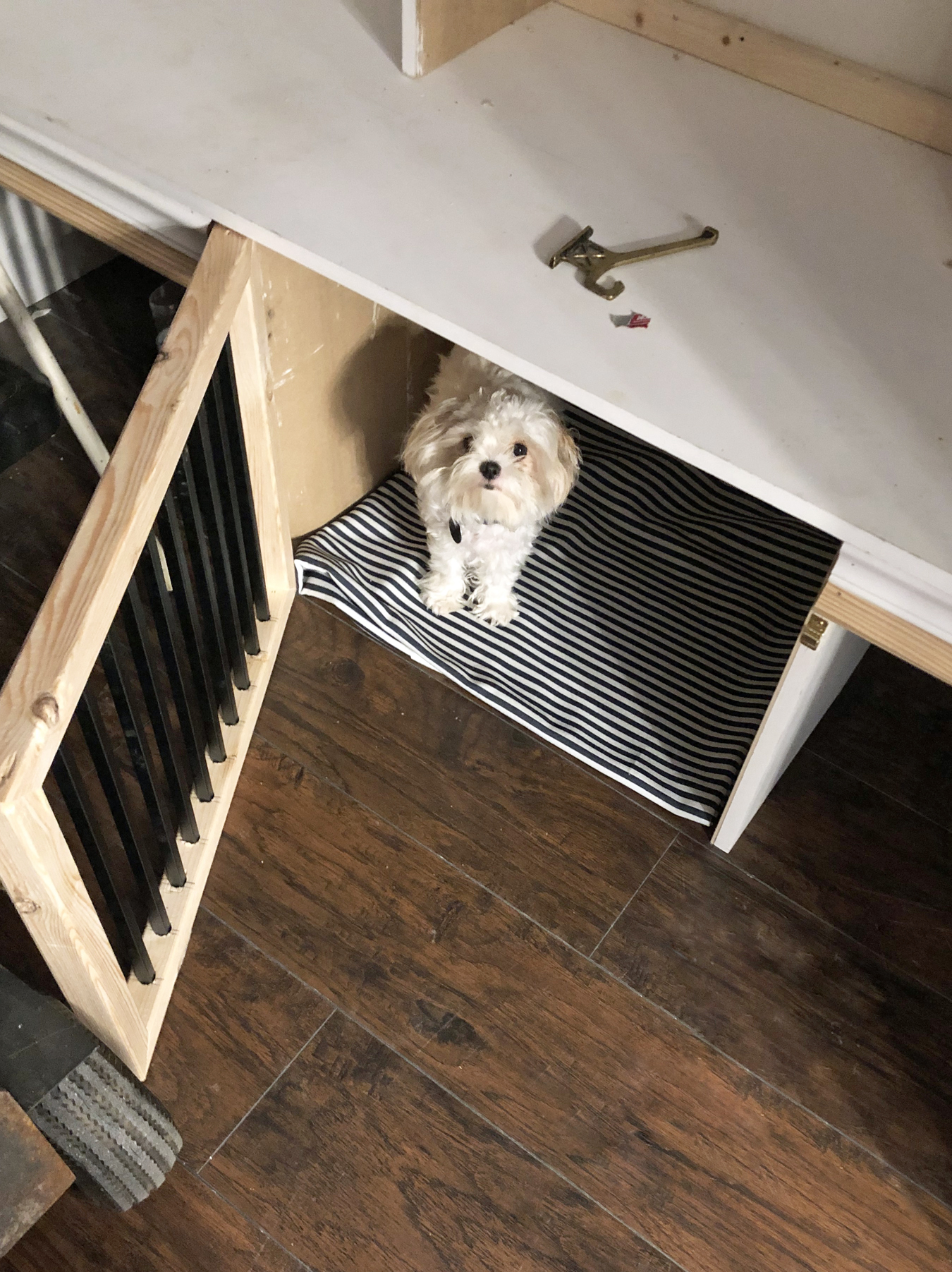 And since the dark and moody didn’t work in the main area, I thought why not in here?! So I am currently in the process of carefully painting these guys with a few coats of Black.  (SW Caviar to be exact). 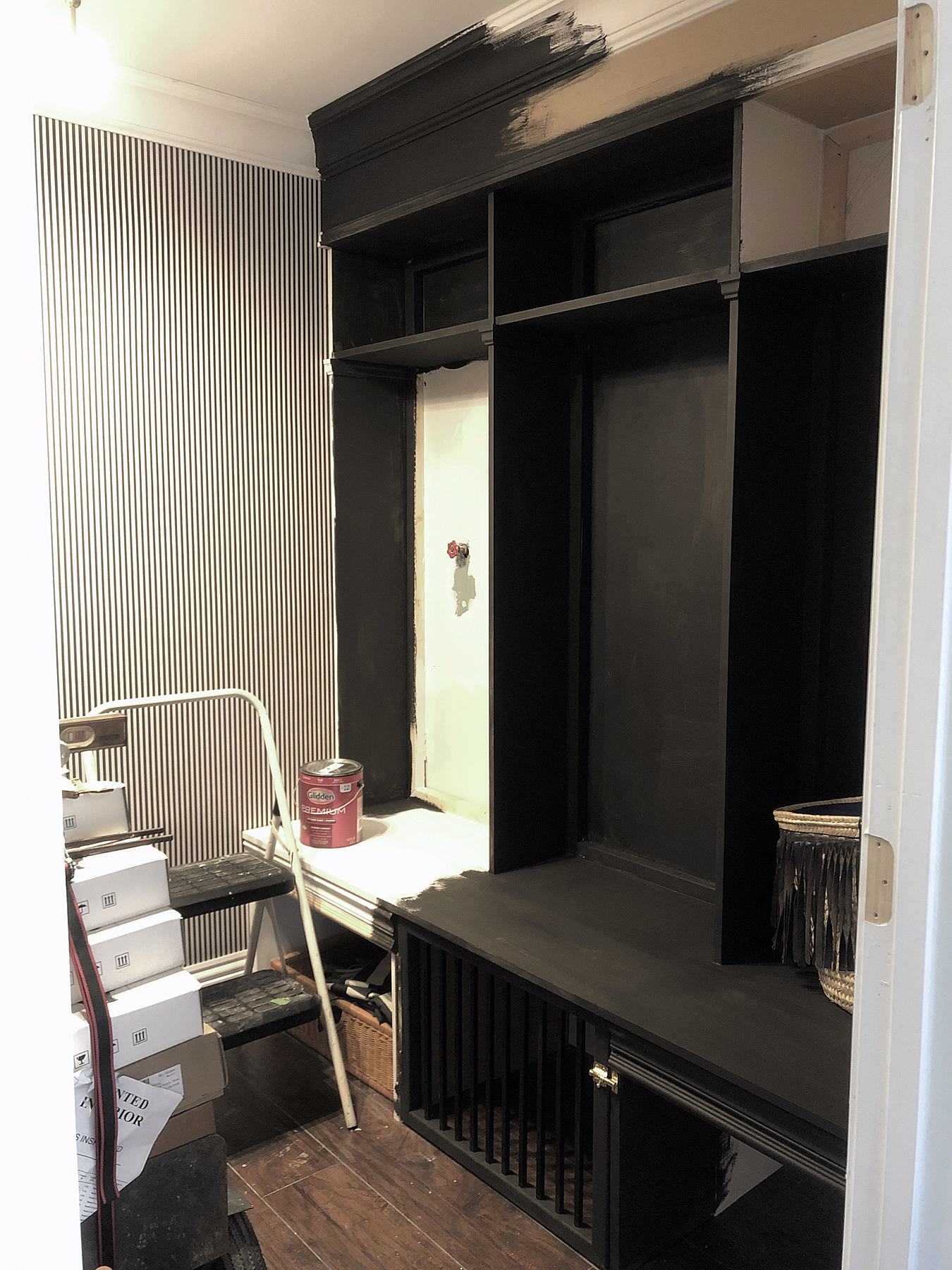 This space, while unfinished, definitely feels like it has a purpose now.

Be sure to come back Friday for the second ORC update for the week.  The bathroom was the one space that needed the most physical labor and was the one I was most terrified to start!   Hence the procrastination, ha.  But with only two weeks left, it couldn’t be put off any longer!!

Just in case you missed any of the other weeks, here are the links.

Be sure to check out what everyone else has been up to!!