May 19, 2020by Kristin9 CommentsBuild, Collaborations, Decor, DIY, My Home, Portfolio 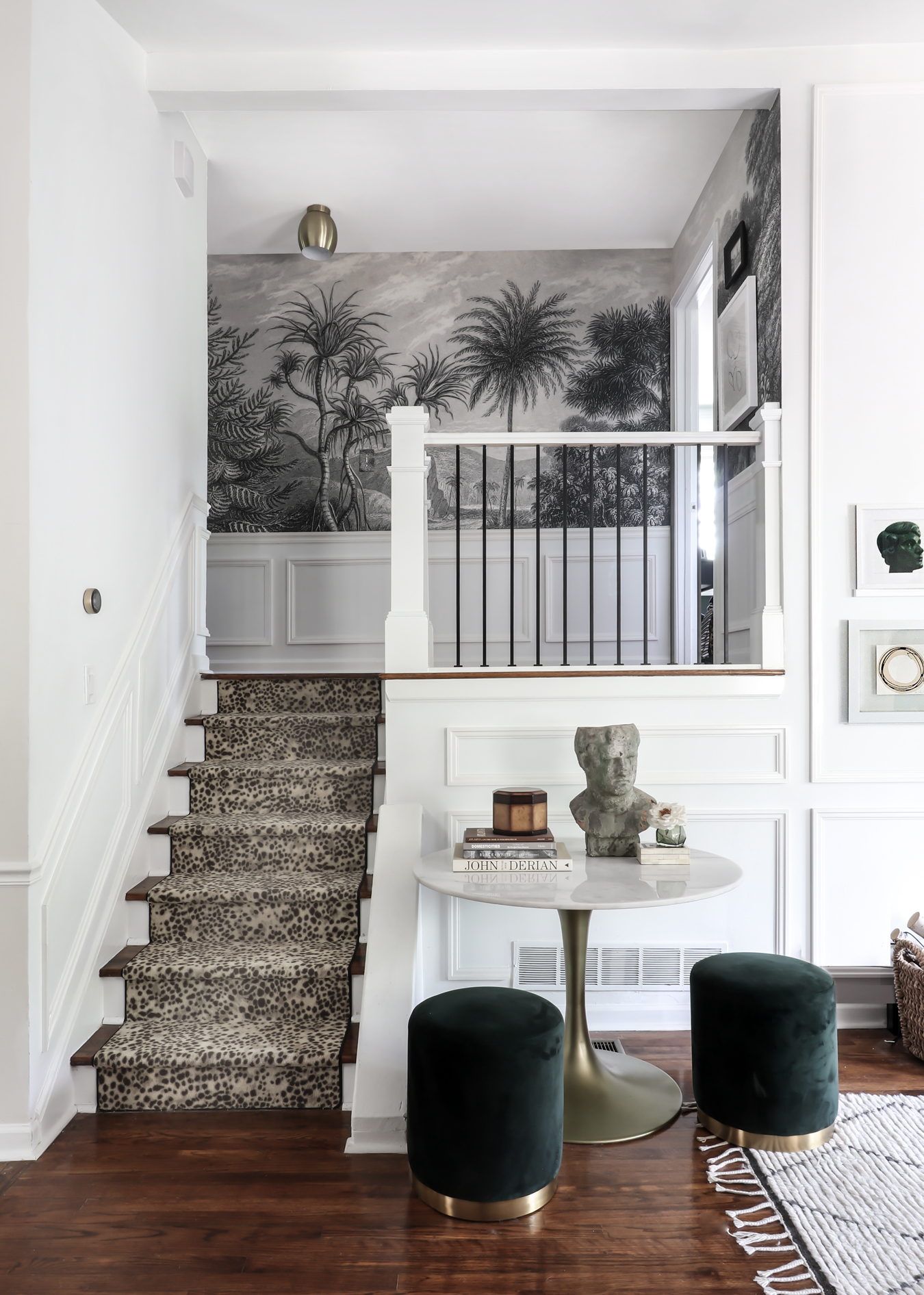 We go into a lot of projects with a pretty solid grip on what we are getting ourselves into… This was our first time tackling stair railings.  My husband and I were very methodical about each step (no pun intended!) to ensure we not only installed a beautiful railing, but a safe and sturdy one as well!  As I mentioned yesterday, the old railing was not installed well.  It wiggled and wobbled, plus it was way to high!  Almost 50+” high.  So I knew we had to address the railings sooner rather than later.

I went with LJ Smith for all of the stair parts.  Not only do they have style options for every decor, they also have excellent tools to aide in the selection process.  I knew I wanted a beefier Newel Post.  Something classic.  I choose the Box Newel as I felt it complimented the moulding we have been installing and also felt similar in shape to the pillars on the front of our home.  I loved that the Box Newel also came in a half version to go against the wall.  We could have gone with an escutcheon, but I thought the half Newel had a bit more presence.

For the balusters I went back and forth between wood and iron.  LJ Smith has beautiful options in both.  I decided to go with a simple hollow iron baluster.  Visually I wanted them to almost go away.  After having the traditional white spindle style for a few months, I decided we had been there and done that.  The iron would be my modern twist on the traditional railings.  LJ Smith also has a Stair Visualizer tool that definitely helped to solidify my decision. 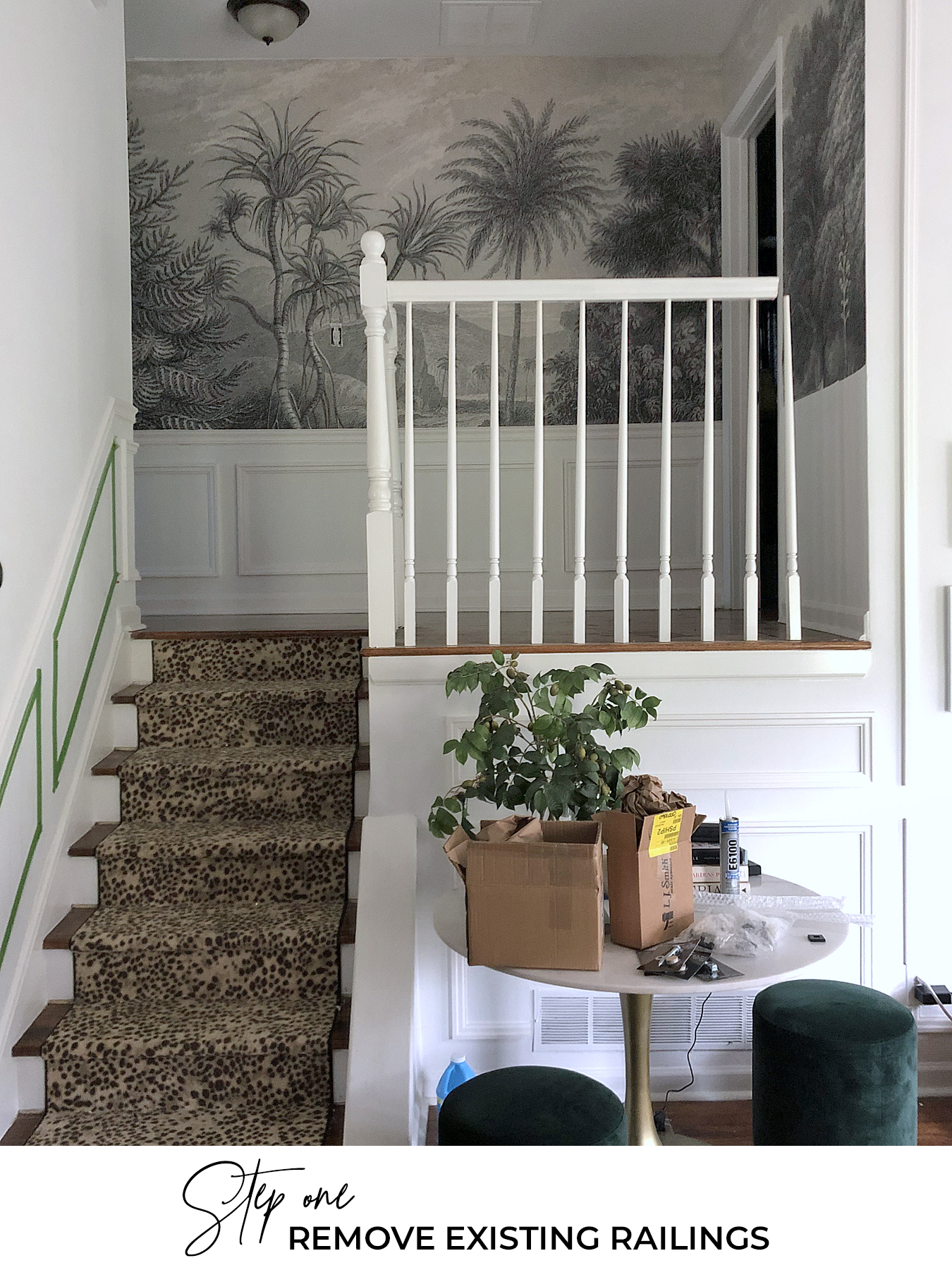 It is always quite cathartic to remove something you never liked in the first place.

Once the new Stair Parts arrived we got to work!! 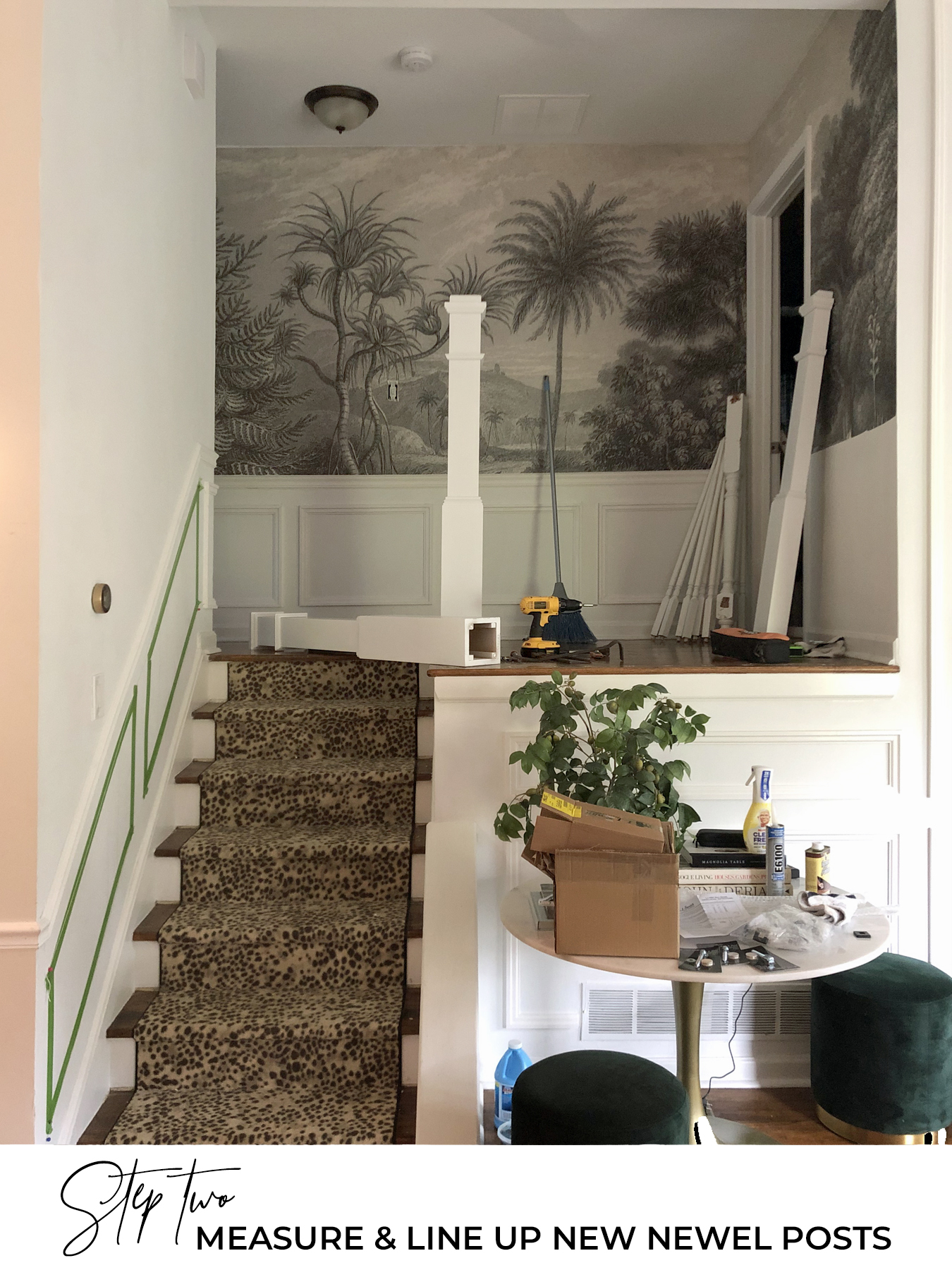 Like I mentioned in yesterdays post, all of the parts and pieces will come in a standard length.  It depends on the space, stair arrangement, etc… as to what size they need to be.  We used our Radial Arm Saw to cut down the base of the three newel posts.  They attached to the floor with a plus shaped block of wood that came with the posts.  This was bolted to the floor.  We added construction glue to the blocking and slid the posts over them.  We then drilled long screws through the posts into the blocking.  Ensuring each post was level at each point.  We let these dry for 24 hours before moving onto the next step. 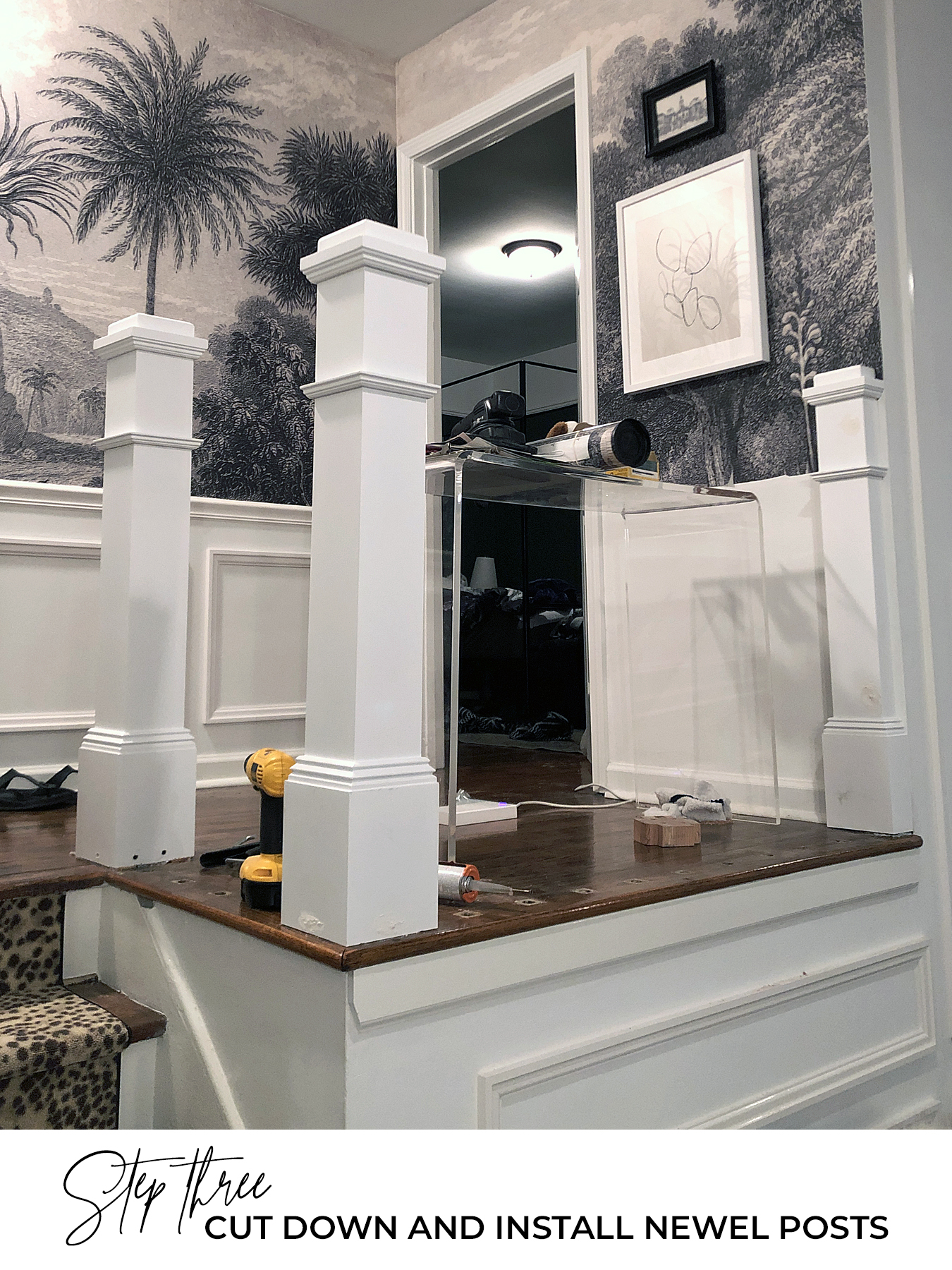 We strayed a bit off course with this next step.  It wouldn’t be a Hunted Project without a little extra creativity thrown in.  99% of the time, your new balusters will not line up with the holes in the floor of the old balusters.  This was definitely the case here.  But here was the kicker, we were planning on replacing Skirtboard, the piece the balusters are placed into, but our 1960 something hardwoods were a different depth.  The Skirtboard would not sit flush with the existing floor.  So after a quick brainstorming session, we opted for a flat stock 1×6 that would be placed on top of the existing floor and run flush between each Newel Post.  Once we attached them both in place using our nail gun, I was immediately happy with our workaround. 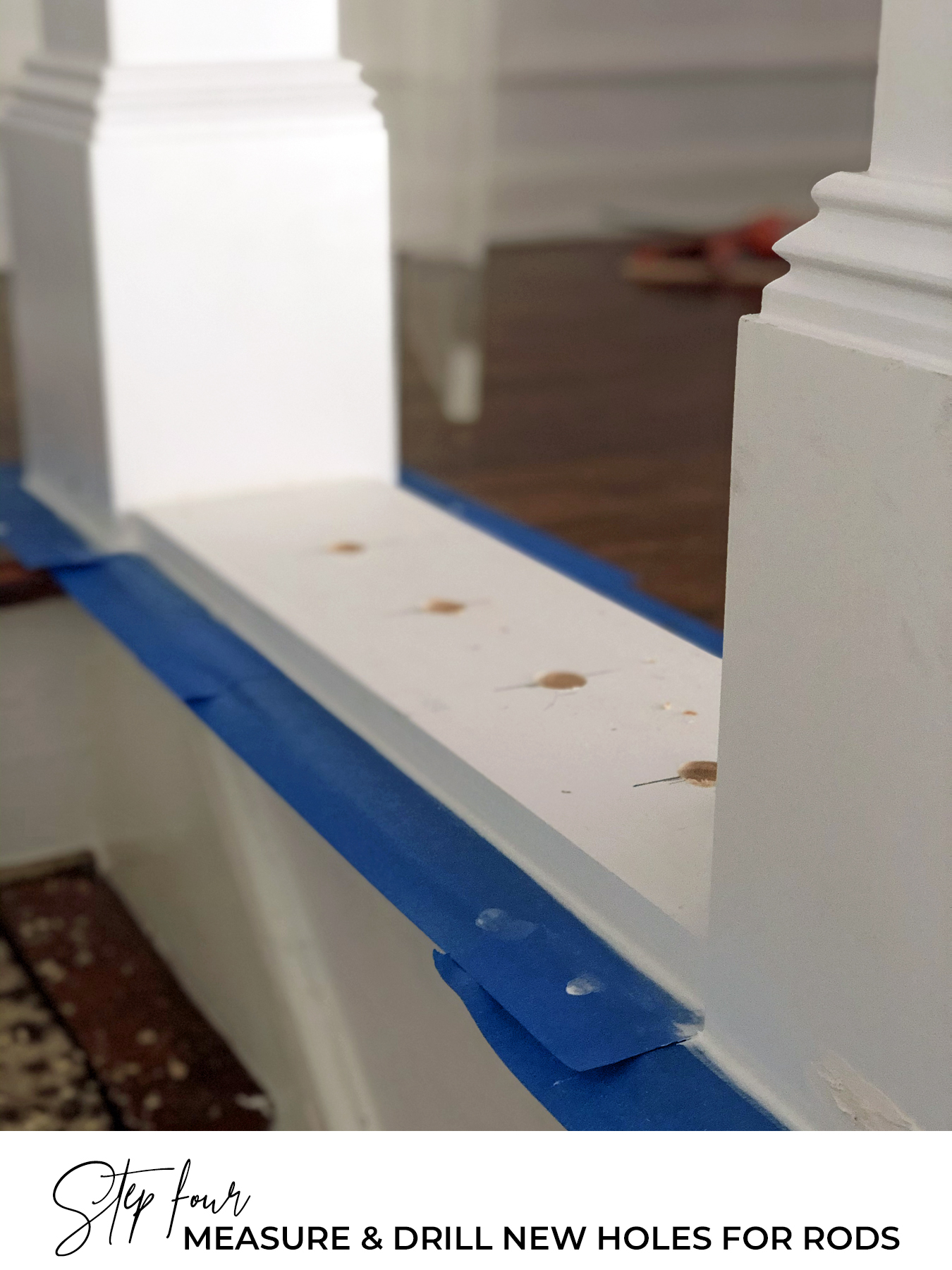 We then measured out and marked the holes for the new balusters using a drill bit that was just a hair larger than the hollow metal rods.  Most balusters are spaced 4″ or less.  We went with a little less as we have a little 8lb puppy, who will not be getting much larger so we figured a little less was best.

While we had the drill out, we marked the positions where the bolts would be inserted on the Newel Posts.  This part made me very nervous… that ended up being a very large hole!  It looked like a bird feeder.  But don’t worry, we had a wood plug included in our hardware kit from LJ Smith and we were able make it disappear later. 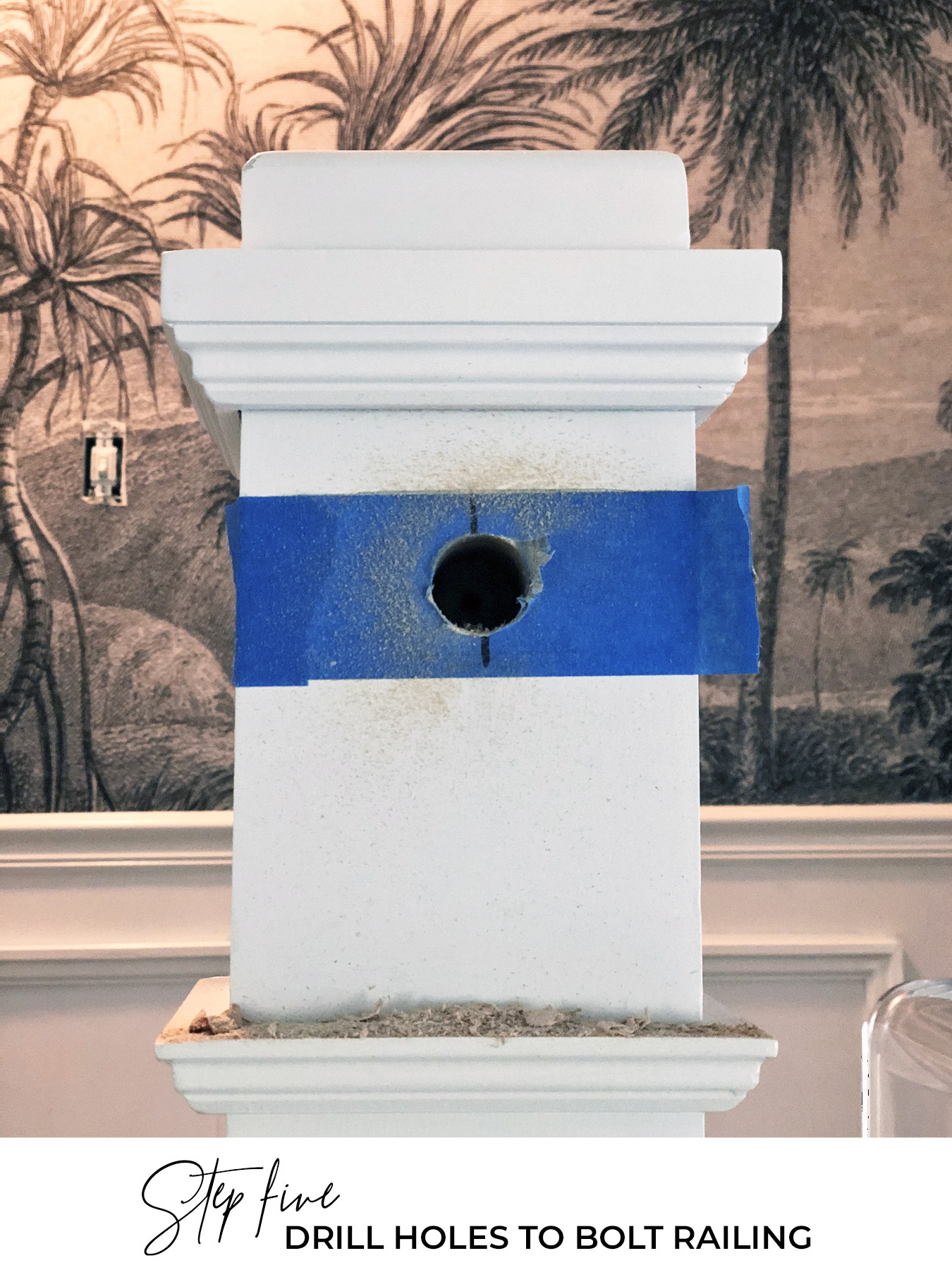 And now we were on a roll.  More measuring & more marking!  We cut down the handrail to length & balanced it on its side in between the Newel Posts.  We then placed a baluster in our pre drilled holes on the floor & held them up level.  Once lined up, I traced the outer edges of the rod.  Once all of the edges were marked, I found the center point of each and drilled an identical hole to the ones in the base.

We tried a few other methods, but this method proved to be the most successful for us! 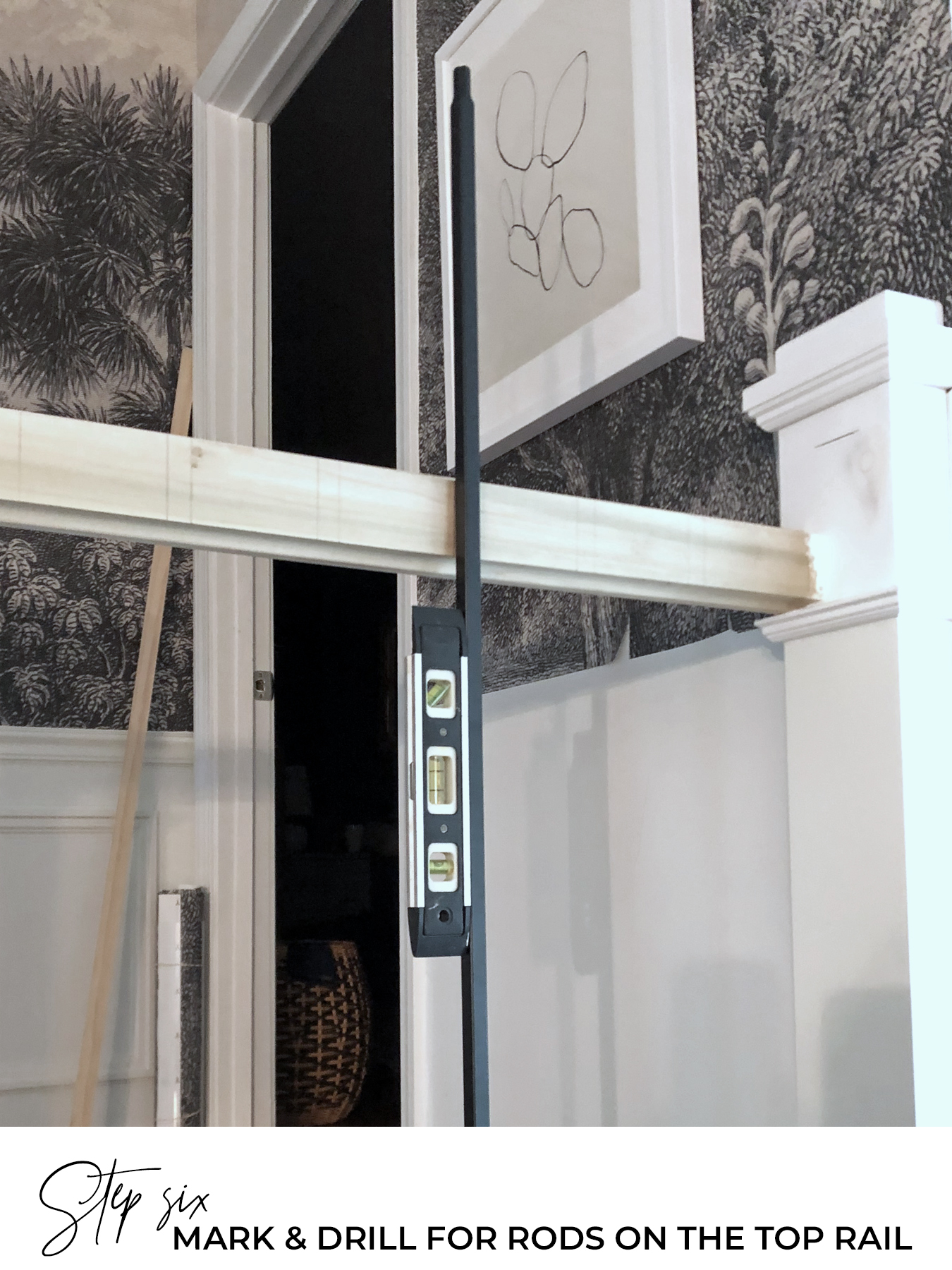 I then cut down all of the Iron Balusters.  I used a jigsaw with a blade specifically for metal.  They cut beautifully!

Now comes the part where the vision comes to life!  The balusters are glued in place using a small dab of construction adhesive, while the hand railing gets bolted in from either end. 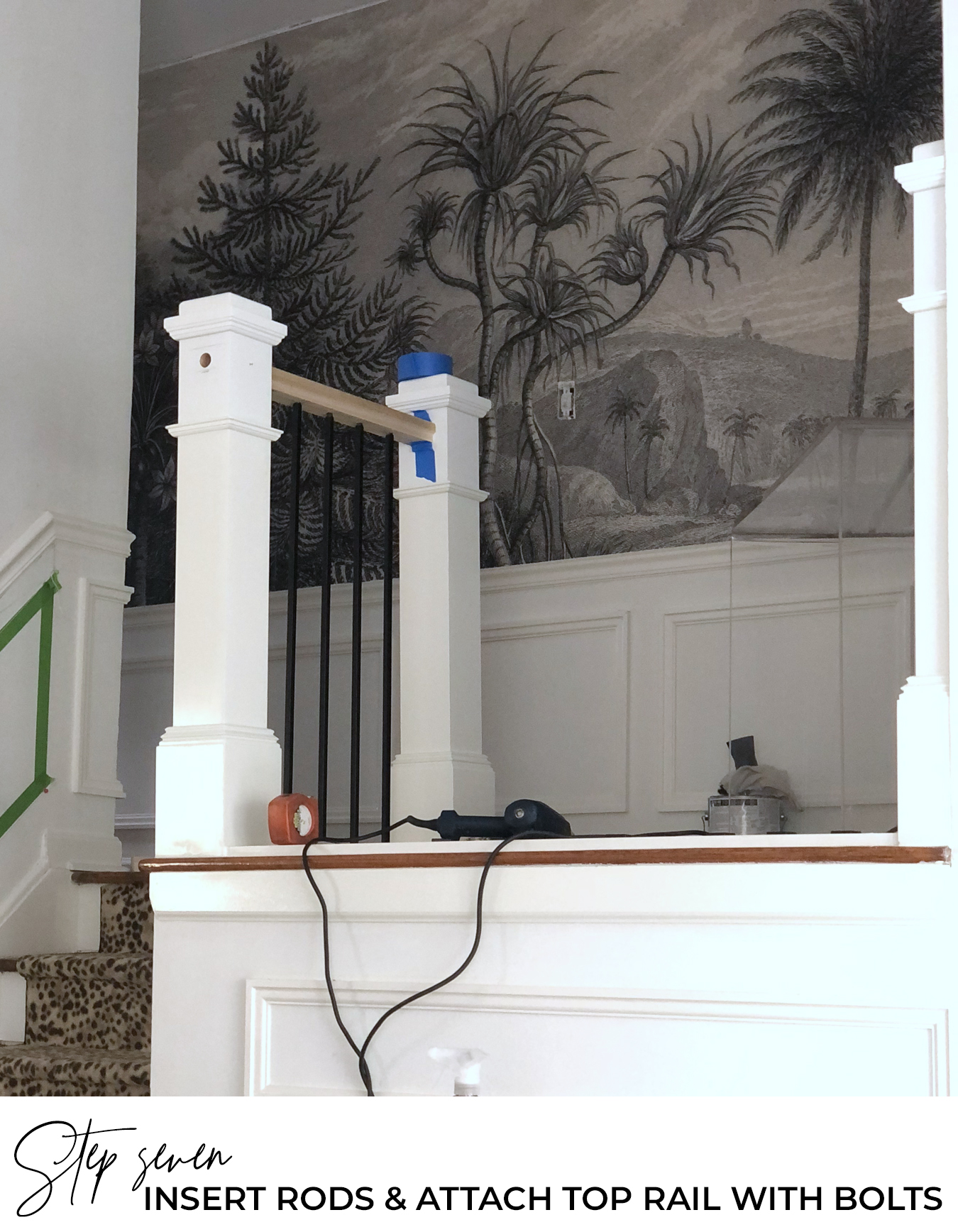 This was right after we got all of the railings installed and the plugs inserted into the birdhouse sized holes!  We used a little spackle on top and sanded them down a few times until they were completely gone. 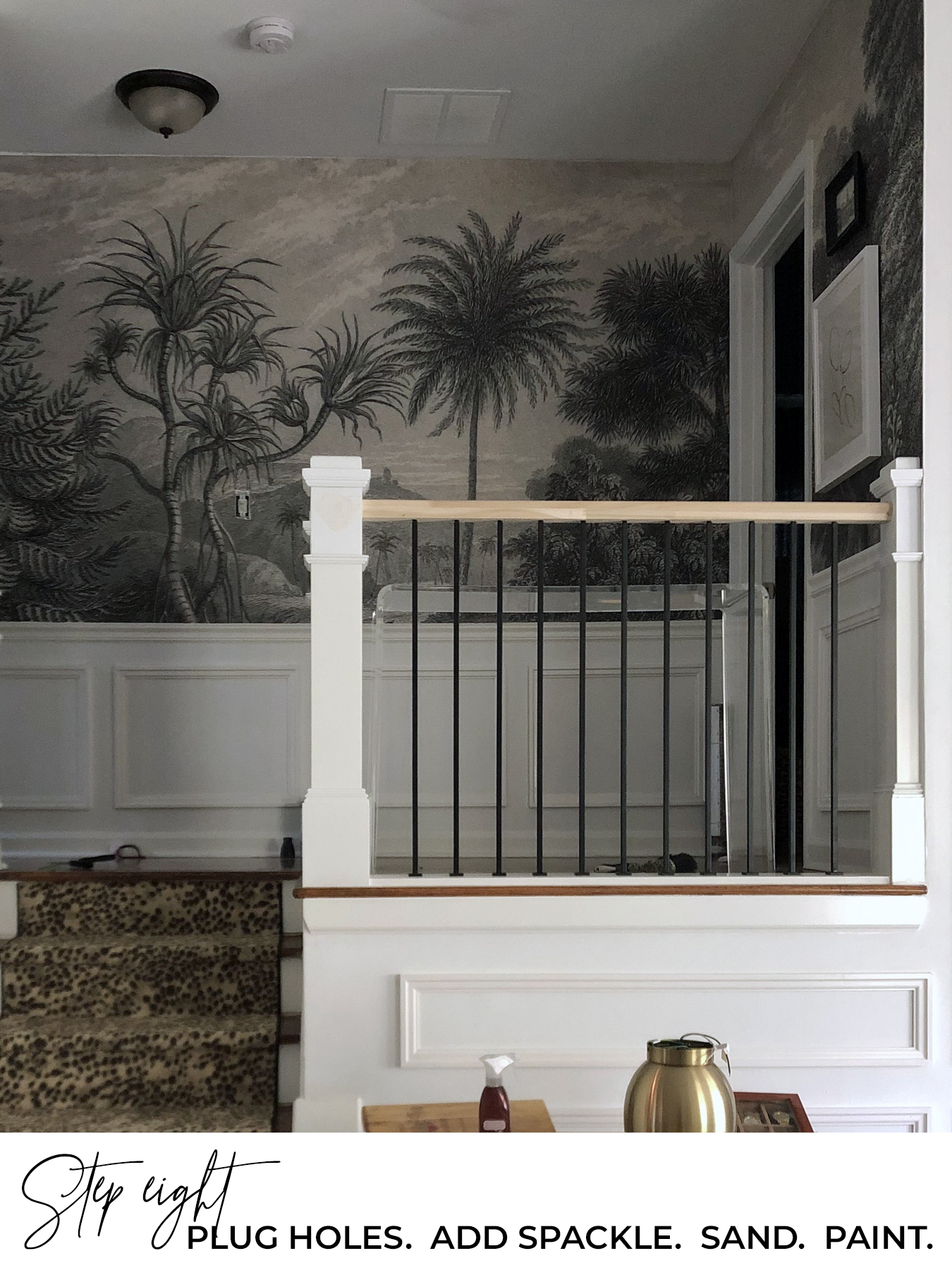 A fresh coat of paint on all of the wood parts & our first stair project was complete.  There are no wiggles or wobbles, and we are all so pleased with the overall aesthetic as well.

The change was fantastic, but the railings also feel like they have been here forever.  I feel like we definitely made the right choice mixing the wood and iron together.  And I have a secret for you… I had a few iron balusters leftover & I found a way to incorporate them into the One Room Challenge that are not stair railings!  So stay tuned for that.

Here is a complete parts list of what we used for this install from LJ Smith:

And here are the tools we used.  We have all of these, but most can also be rented from your local big box hardware store for jobs just like this.

** LJ Smith provided all of the Stair Parts.  All Photography and opinions are 100% my own.**