OLD GARAGE TURNED PARTY SHACK || BEFORE AND AFTER 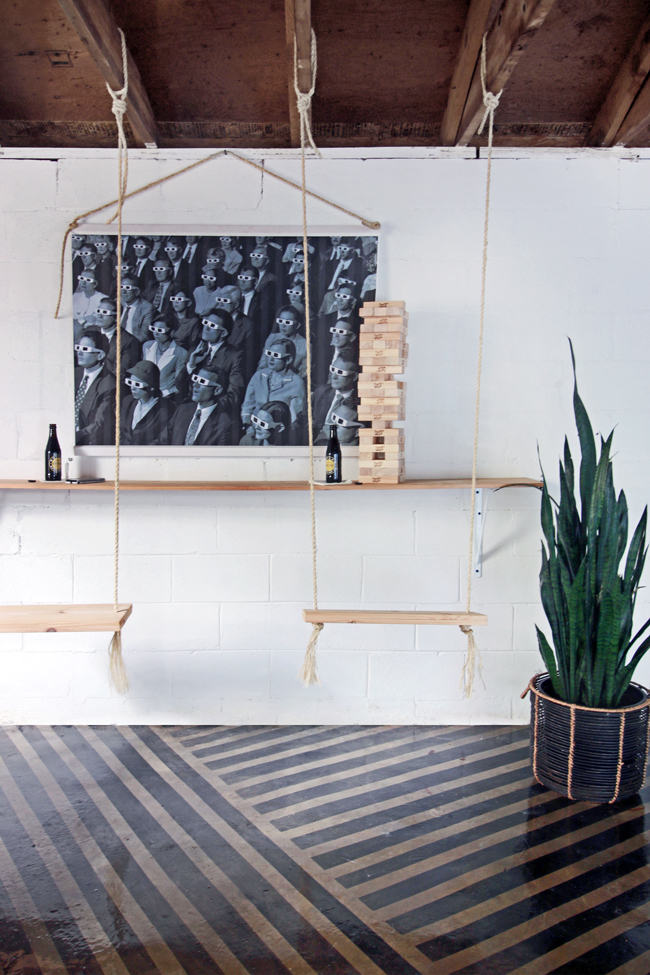 This post is sponsored by Sherwin-Williams®. All opinions are my own.

Sometimes the idea of a project is so good that I put blinders on to the actual amount of work that needs to go into it to make it happen.  This is the story of one of those projects!  When I first started working on #ProjectFamJam we knew the main house had to be tackled first, but in the back yard sat a cinder block detached garage that had potential.  It has sat there, patiently waiting ever since.  A diamond in the rough… although as it sat I quickly forgot how correct the term rough was. 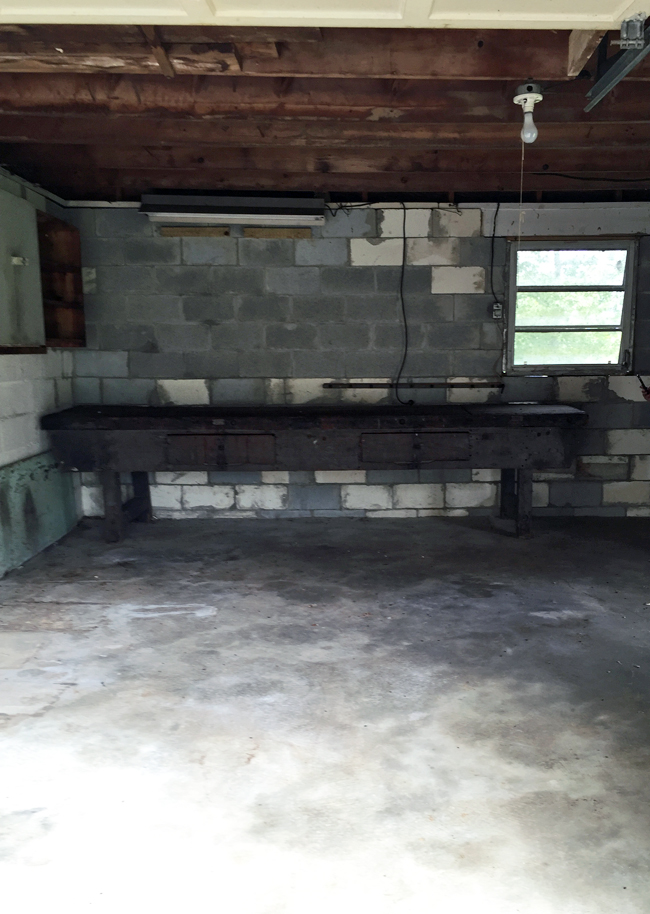 This was one of those workshops that was most likely built by the original owners and definitely  served its purposes as a workshop.  The very large wood workbench along the back I am sure had seen its fair share of projects over the years.  Fluorescent lights were hung where they were needed out of necessity, not for aesthetics.  And large screws and nails were strategically placed, even if now they simply appear to be random.  This was the job of this little workshop, until now.  You see, since day one the term thrown around for its future end use has been The Party Shack. 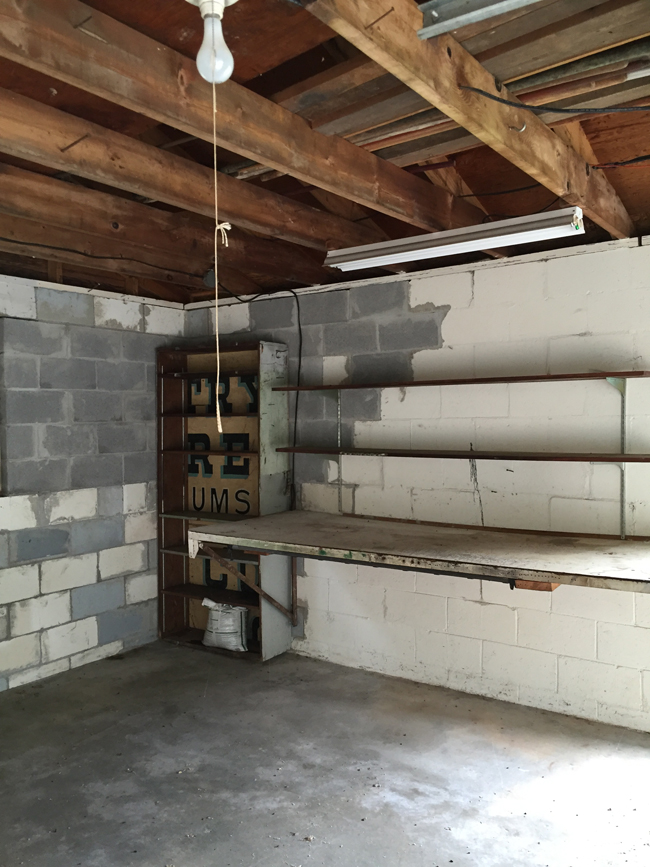 So my job was to turn this once utilitarian space into a desirable hangout to spend entertaining friends.  Again, I had glamorized this space in my head over the past year or so and glazed over the fact that we may or may not have had to get an exterminator out here, the power to this building had been cut years prior and there were layers of dust/pollen/dirt on every surface.  Thats what happens when a building sits abandoned and unloved.

First to tackle, aside from cleaning… was to address the surfaces in this space that would not be changing.  The concrete floor (something I was eager to work with) and the less than desirable CMU (Concrete Masonry Unit) walls. 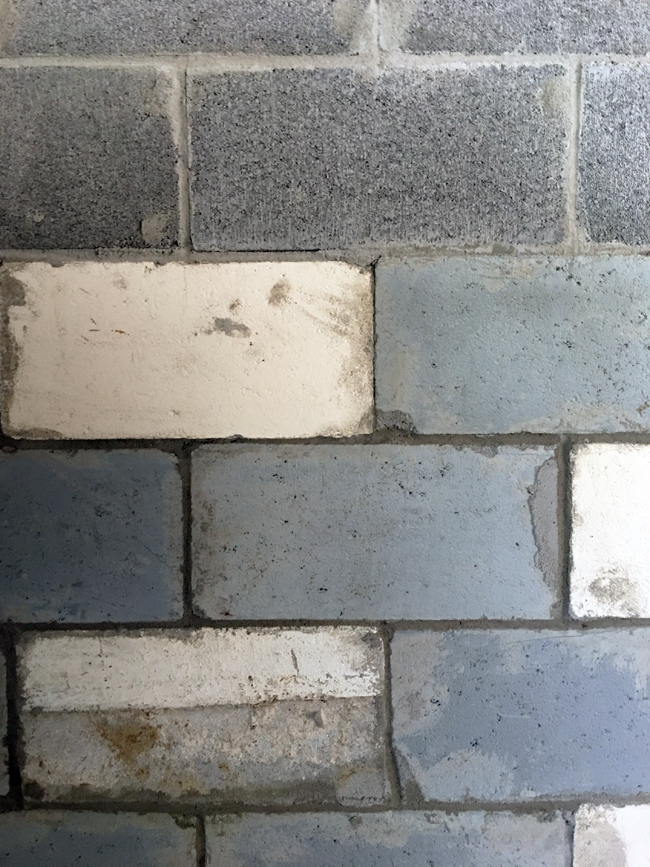 These walls looked as if they have been assembled and reassembled over the years.  Patched and repaired as needed.  Again, a utilitarian space.  I get it!  But for my purposes I needed them to look less like a garage.  So, in keeping with the rest of their home I decided to make them white.  Taking them white would freshen the space and allow the exposed wood rafters and the floor to stand out.  Exactly what I wanted.  Now to paint them!! 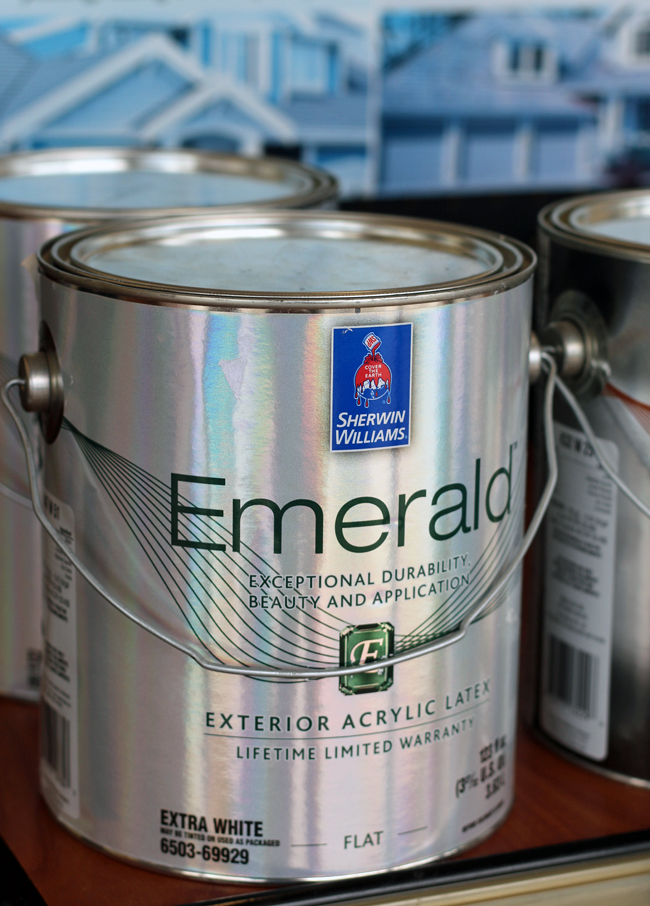 I simply washed the walls down with a hose and once dry, rolled the paint on with a very thick high nap roller.  That way it would get into most of the nooks and crannies of those pitted blocks. 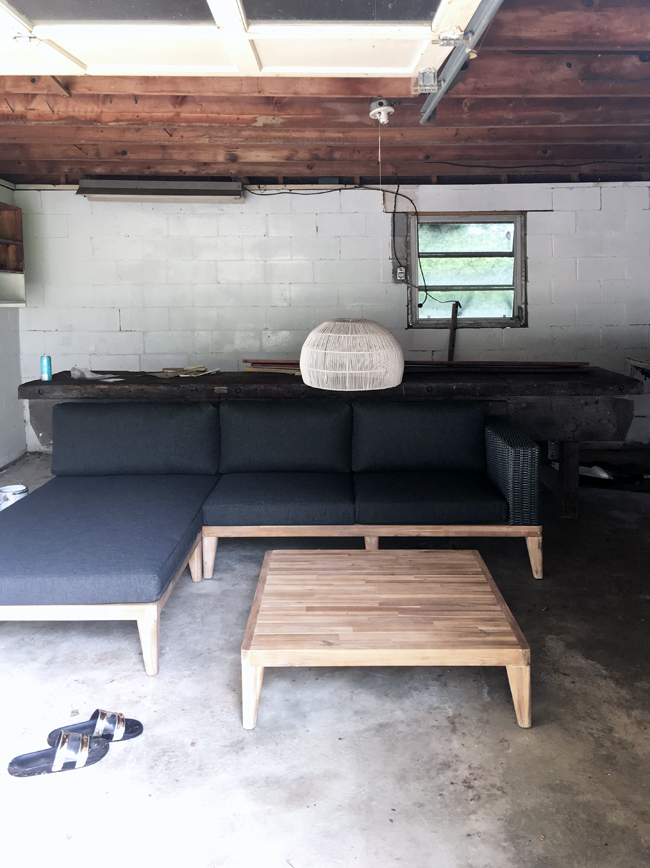 As I waited for some additional holes and patches to dry on the rest of the walls I decided to focus my attention to the floors.  I cleaned them thoroughly with H&C Concreteready Cleaner Degreaser and then followed up with H&C Concreteready Phosphoric Etching Solution  (all available at Sherwin-Williams!) that prepared the floor for the new stain.  This floor never knew what was coming!  I knew that I wanted something graphic on the floor to pull focus from the walls.  When brainstorming with my clients I suggested the pattern I did on their closet doors last year.  The haphazard stripes would be a great solution for this concrete floor as none of the walls are perfectly straight and the floor itself was not necessarily perfectly flat either.  Any other pattern might draw attention to those two flaws, this one would be a bit more of an illusion.  I began to tape.  And tape.  And tape some more. 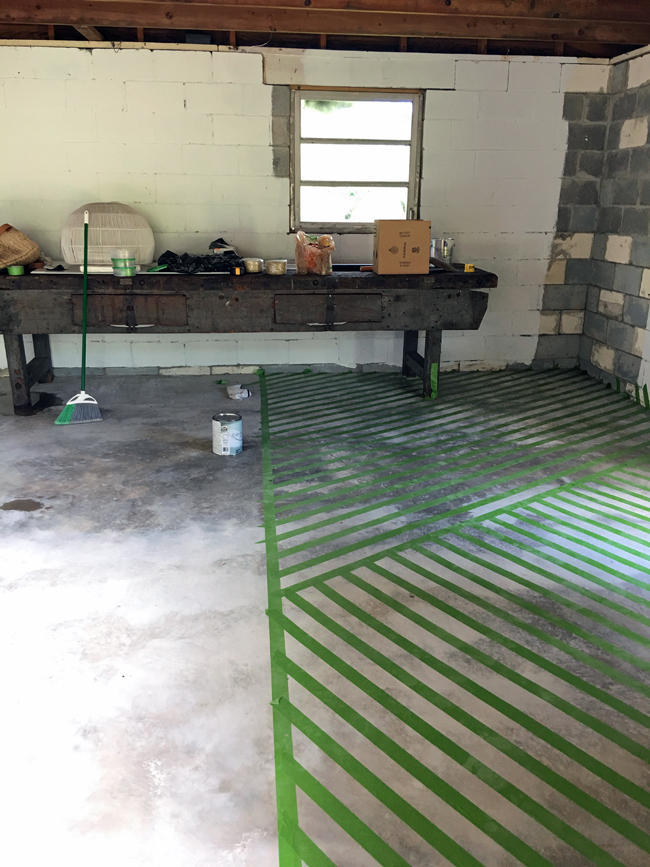 I worked on half the room at a time, allowing me to walk around on the untouched portion while I strategically placed the tape.  Once half of the design was laid out, I began to stain.  I used a Semi Transparent Stain in the color Obsidian.  I did not want a solid color as I was embracing the flaws of this space and working with them not against them.  The semi transparent nature allowed some of the original rust stains show through, a look I was hoping to achieve to pay homage to its previous life.  I rubbed the stain on with a glove and a rag.  And cotinued until all of my tape lines were filled.  The stain was dry almost immediately, as the concrete absorbed the color instantly.  But I let it sit over night and returned for the other half of the room the next day. 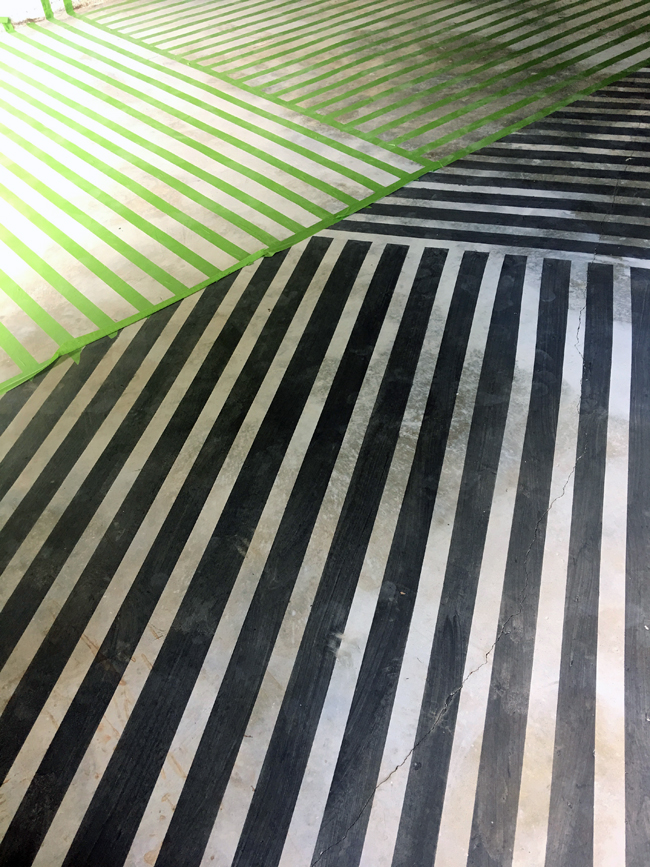 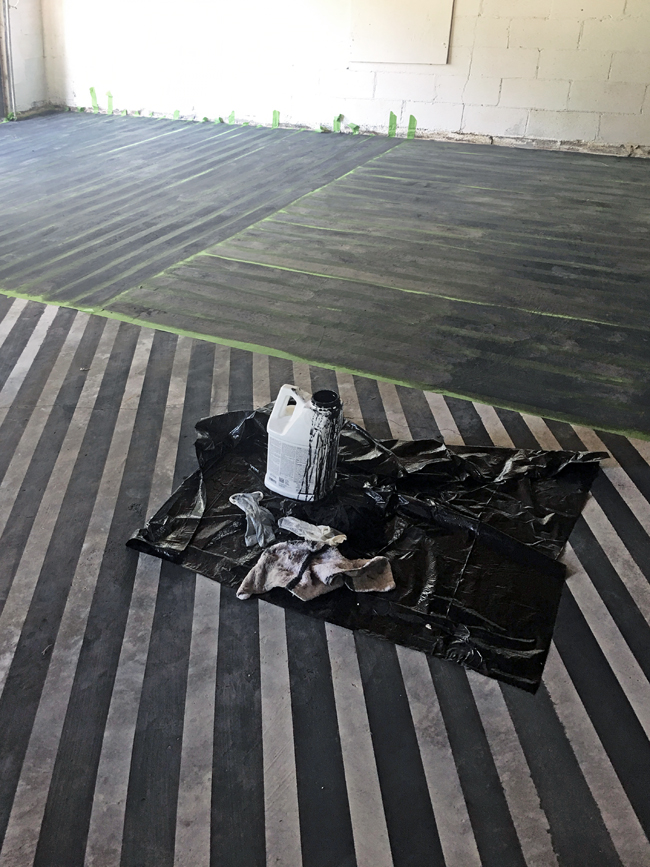 Once all of the tape came up, I knew that all of the hard work that had gone into this dark and utilitarian space was going to pay off. 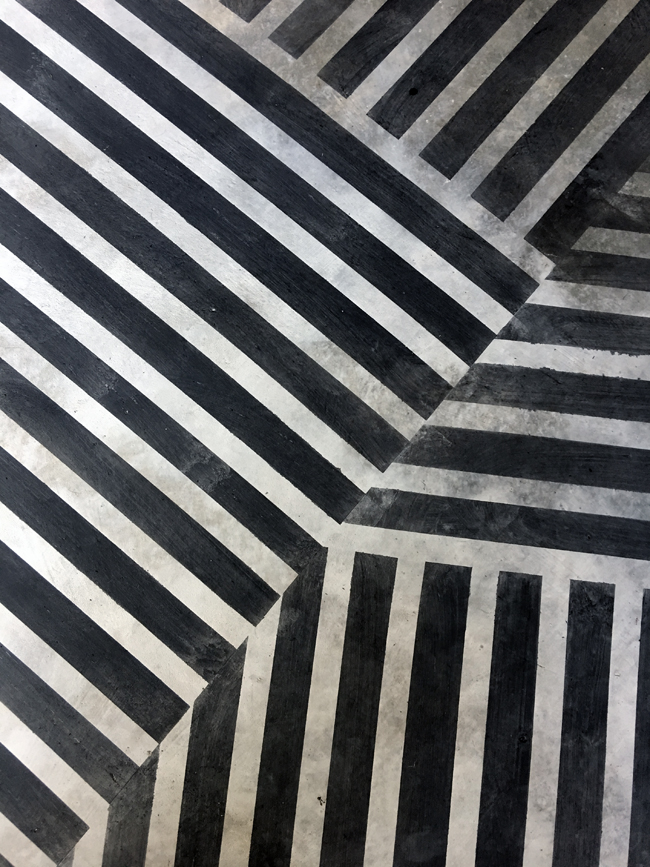 After allowing the floor to dry another day, I sealed the floor with H&C Infusion Solvent Based Decorative Concrete Sealer in High Gloss and finished painting and touching up my walls.  The Party Shack was finally coming to life. 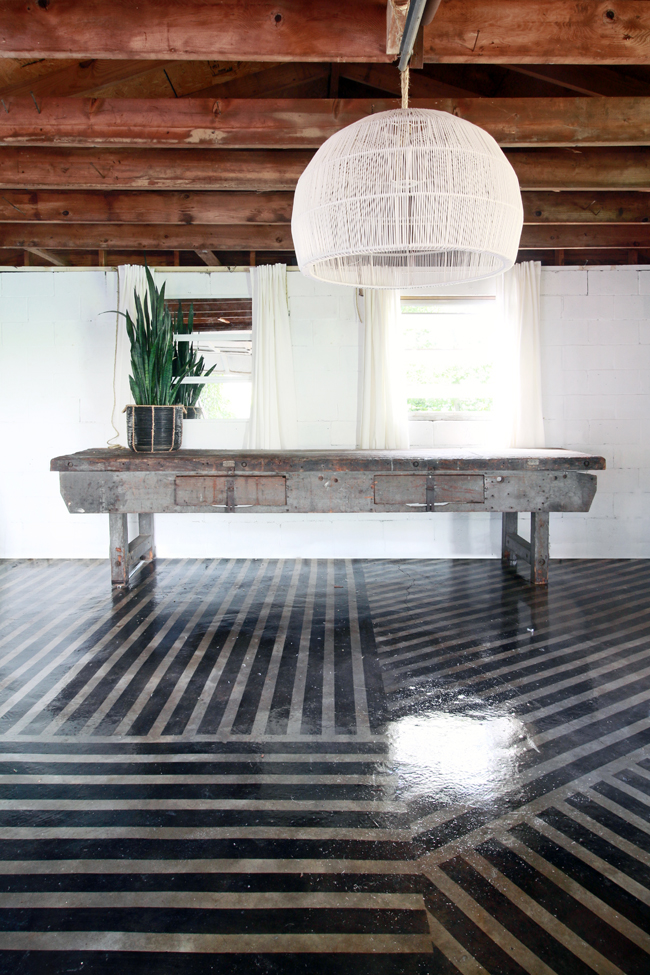 What a difference right?!!  We kept the giant work bench untouched in all of its primitive beauty and decided to build the room around it.  After all, it is still a great place to tackle a project, or act as a buffet for the big game.  But I loved the juxtaposition of the glossy graphic floor with the roughness of the table and the Pure White paint color that completely transformed these dingy, old walls.  By painting the mismatched blocks all the same light color, the flaws all seem to fade away.

Another feature I left was this piece of wood filled with nails.  This becomes a place to hang your hat, or your croquet mallet… 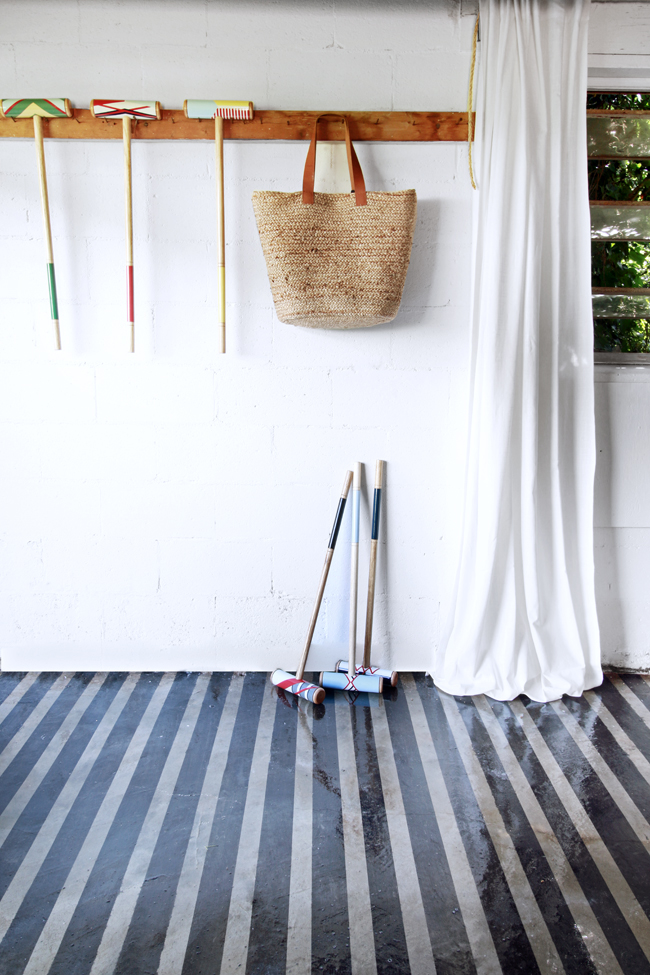 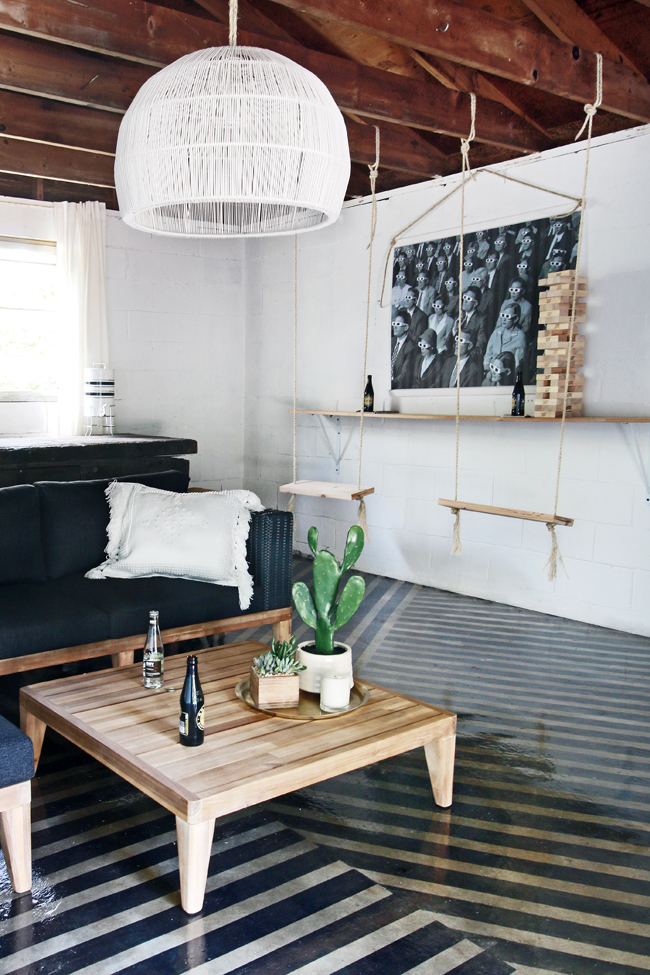 And since we kept the large workbench, the second work bench that once graced this side wall was no longer needed.  Instead a simple wood ledge and some simple wooden rope swings act as a fun place to sit and have a drink.  The playfulness of the swings hanging from the rafters really reinforces the whole idea of the Party Shack, I think.

I’ll be sharing more about the furniture within this space in the next few days, but I just had to share that no matter how daunting a project might appear a little creativity, some hard work and some paint can really transform a space into something amazing!

To see the entire furnished and finished space, click here.