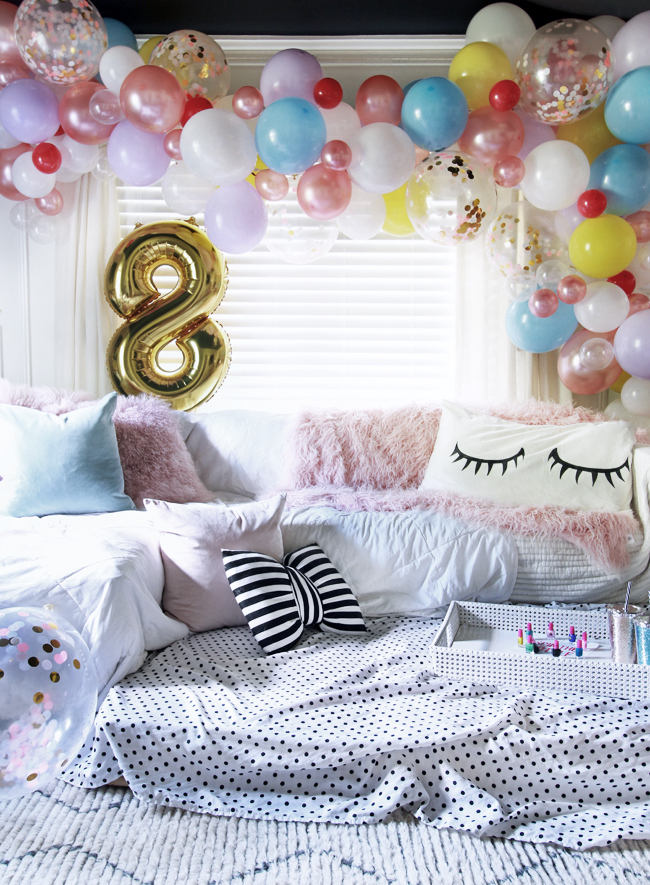 It was Birthday party time again this past weekend.  I can hardly believe that my little lady turned 8!!  For her party this year she decided it was time for a Sleepover Party.  I suppose it is a right of passage of sorts?! So I agreed, as long as the guest list was much smaller than her previous parties! She may have been ready for a sleepover, but I wasn’t sure if I was! lol.  Unfortunately for me, even though we narrowed the guest list down to three friends, apparently I don’t know how to throw a little birthday party.  Lots of activities and about 200 balloons later we had a small sleepover that really ended up being the Best Sleepover Ever!

The entire party idea began after we found these adorable eye masks at HM while out shopping one day. 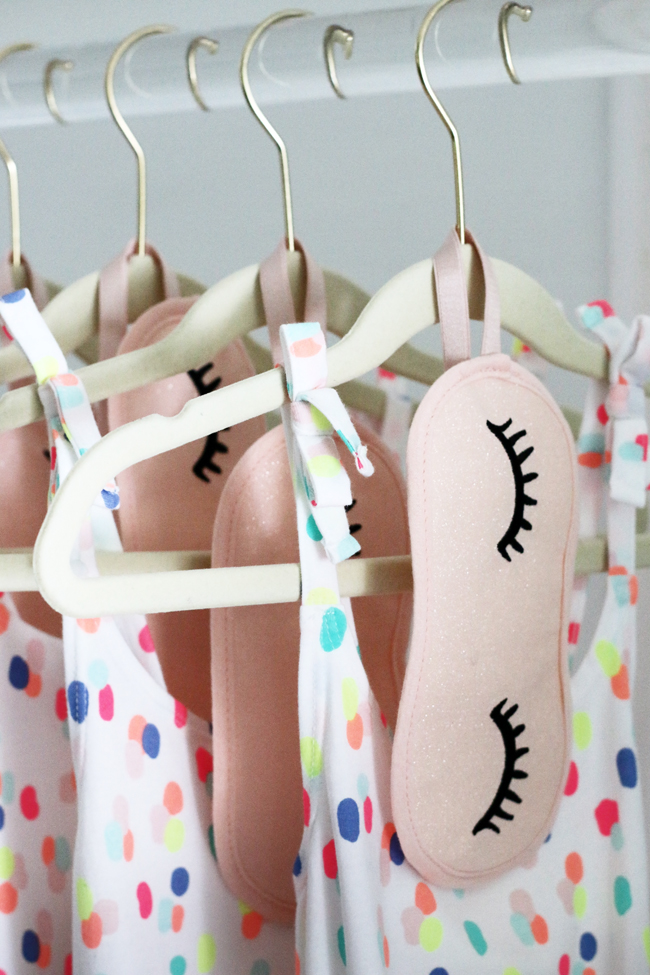 They were the perfect shade of blush, with the perfect amount of sparkle.  You know a little more mature than your standard Princess Pink that may have been fine for a seven year old, but now that she was turning eight we had to up our game.  Ha.  So since we only had a few friends coming over, I decided they obviously would all need matching PJ’s and of course those darling masks.  And the PJ’s ended up being rompers turned into pajamas from an OshKosh outlet.  Honestly, I didn’t even know they made clothes for big kids!  But I am glad I kept an open mind, because they ended up being perfect. 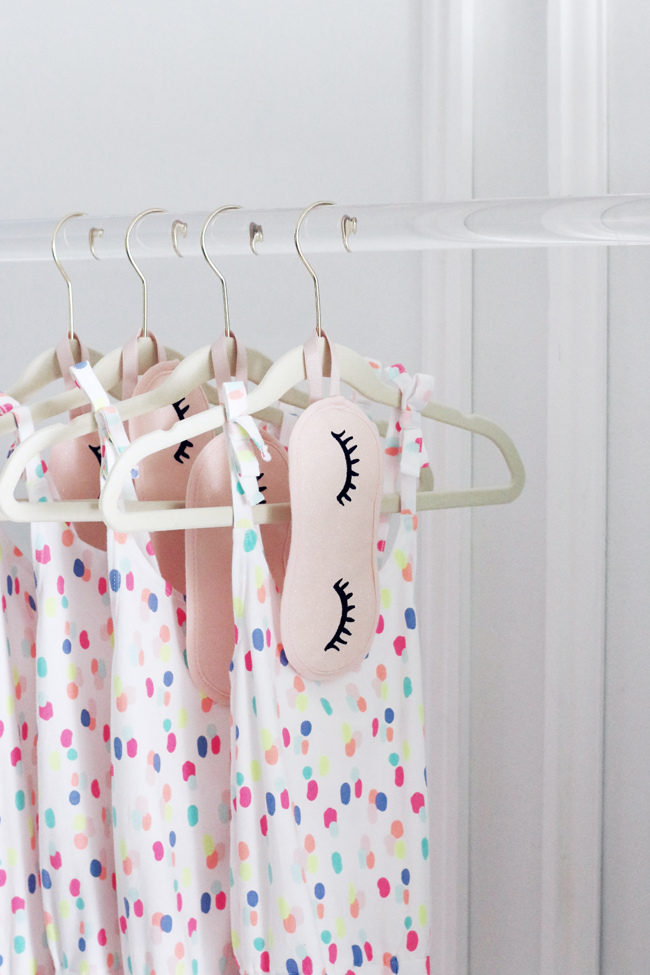 But before we could surprise the girls on the night of the party, I had to get out the invitations.  And of course they too were inspired by the Sleeping Masks.  I scanned the sleeping mask itself and took it into Photoshop for a little alteration.  I printed the front of the invite on cardstock as it was… 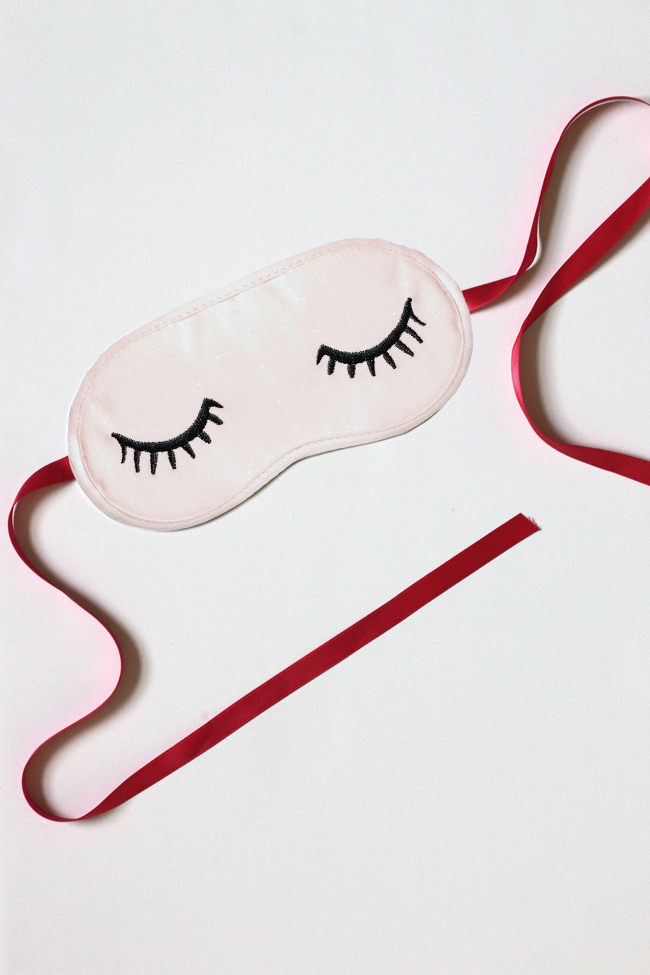 And for the back I lost the lashes and added her party info there.  I printed those on cardstock as well and after cutting them out, I glued them together sandwiching a little ribbon in between to create the tie.  We topped them off with a little glitter for fun.  I sprayed the front and back with a little bit of hairspray and sprinkled on little iridescent sparkles. 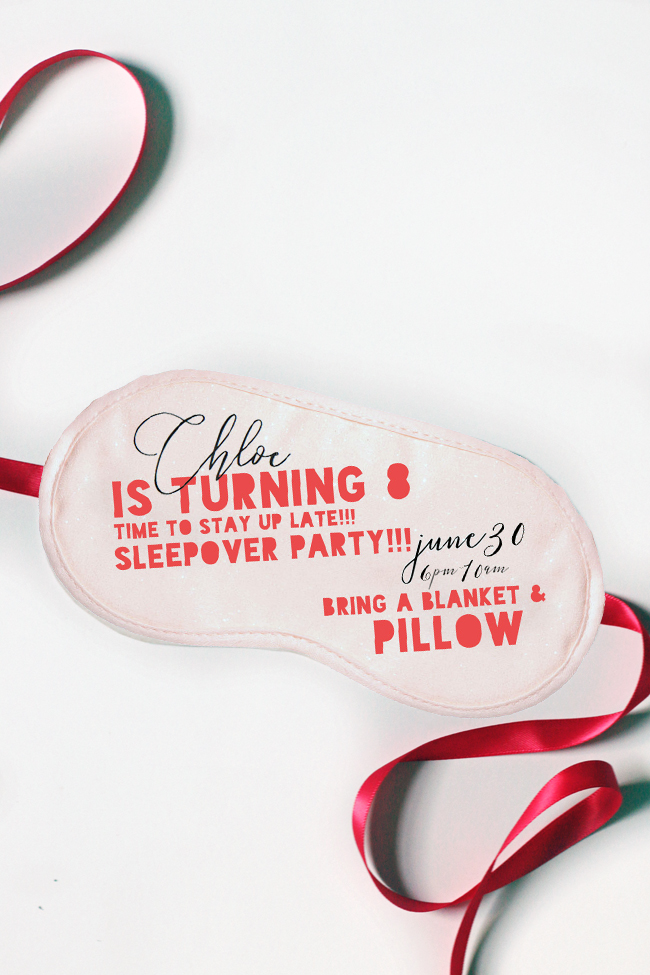 These easily could have been mailed in an envelope, but as we only had to deliver them to two families, we dropped them off by hand.

For the party decor, I was inspired by these adorable napkins from my favorite party line, MeriMeri Party.  Chloe found the napkins when we were out perusing our local TJMaxx and we snatched them right up.  I mean what is better than Junk Food at a Sleepover?! 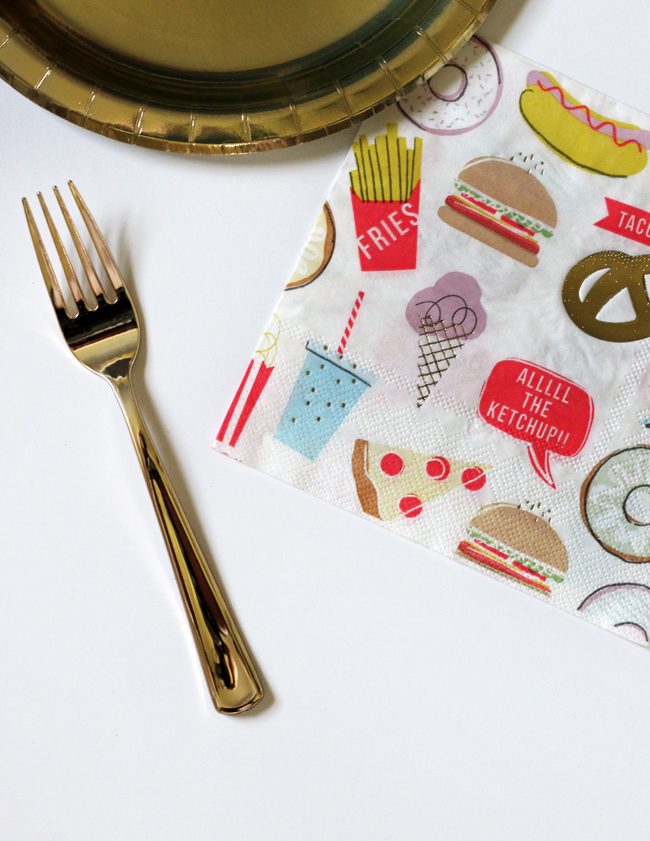 I took the colors (& menu) straight from the napkins and bought basically a lifetime supply of balloons.  I used a hand pump and this special Balloon Tape to create the backdrop for the food table, as well as the sleeping area.  The balloon garlands took a lot of time, (not gonna lie!) but they were so much easier using that special tape!!  I created them two days in advance and they held up beautifully!  No deflated balloons at our party.

I also used a simple piece of white foam core with some gold letter stickers for the backdrop.  I taped this over our existing art to create the right party vibe.  Easy and effective. 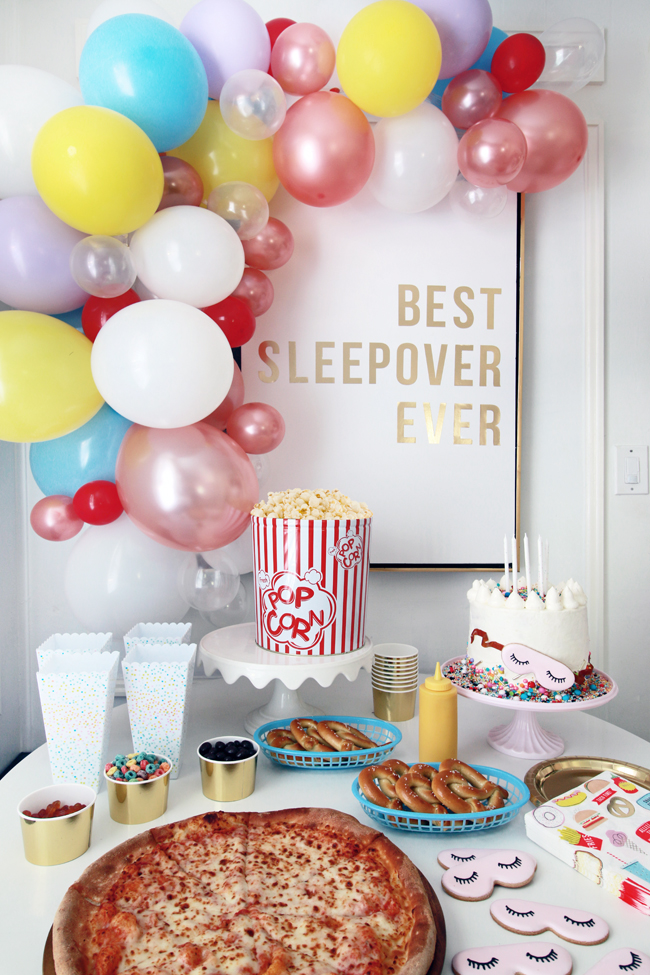 The big popcorn container was a thrift store find and the individual ones were from the Target Dollar Spot.  As well as the blue baskets for the soft pretzels. 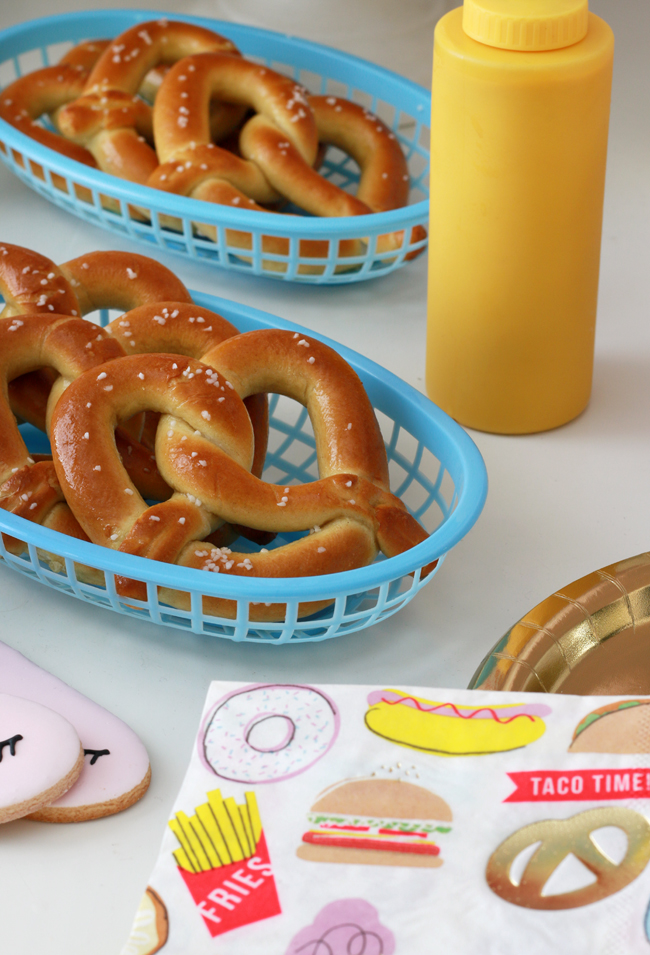 For the cake I went all out.  I usually only make from scratch cakes on birthdays, so why not do it up right?!  And of course have yet another sleeping mask touch!! 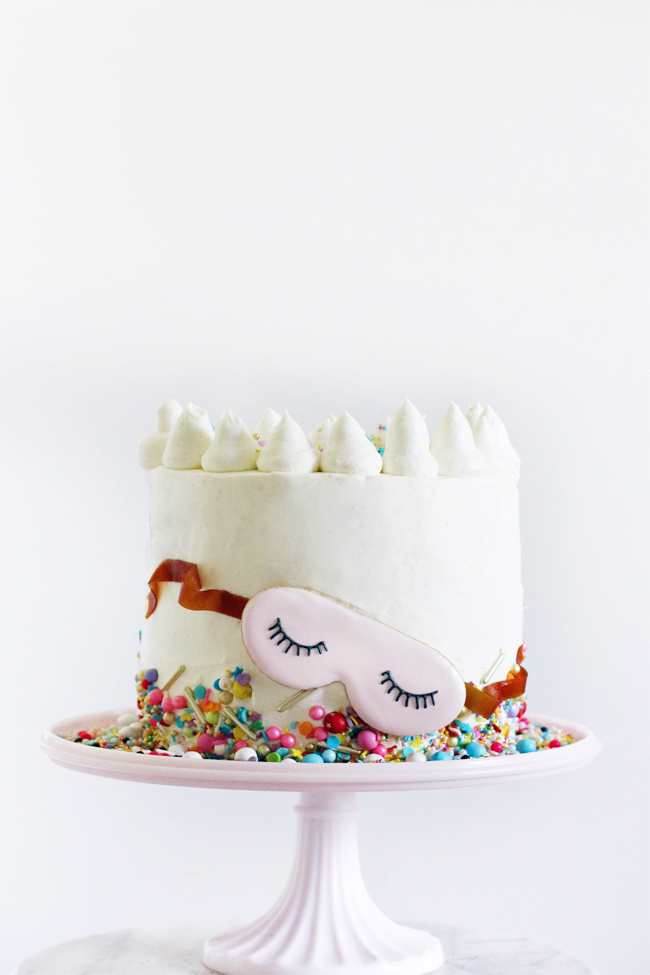 The sleeping masks were cookies made by PS Sweets.  Gretchen is the best!! I sent her an image of the masks and she duplicated them, even down to the sparkle.  I added one to the cake and used an organic fruit leather roll up for the ribbons. 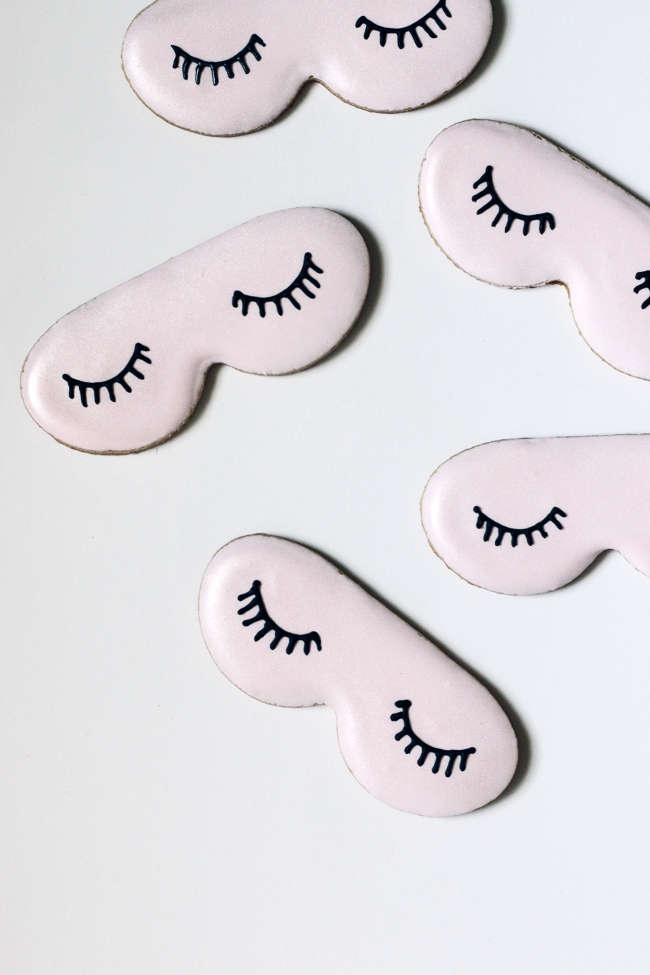 Now for the big surprise, the inside of the cake was five layers of color coordinated deliciousness along with a cascade of colorful sprinkles.  I honestly think the sprinkles were the biggest hit.  None of the girls were expecting that!  ( and for those counting, there is a fifth layer of purple on the bottom, you just can’t see it because of all of the sprinkles!!) 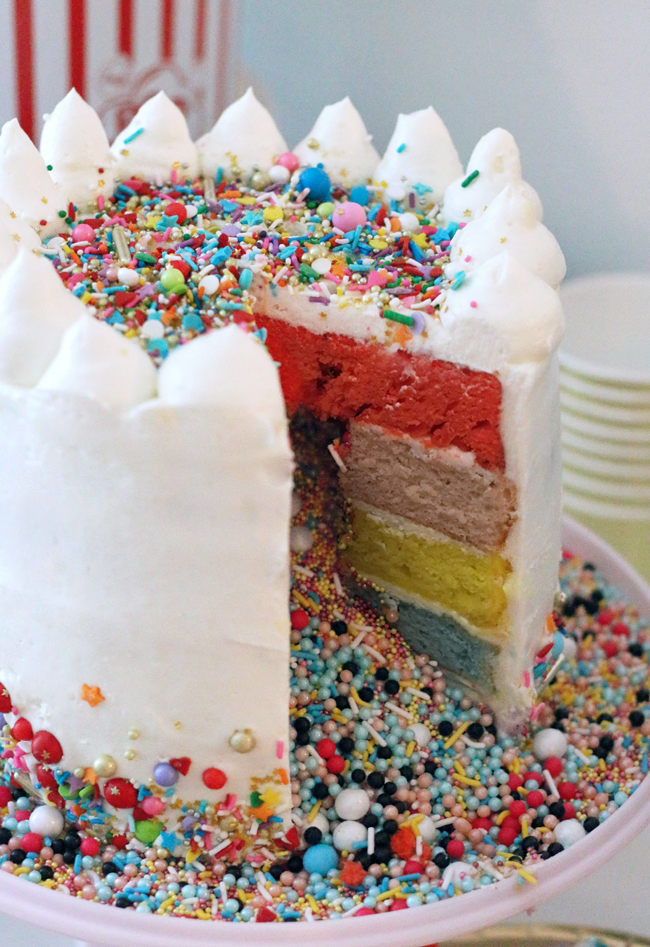 For the first activity we played Spin the Nail Polish Bottle.  I made a little game board in Photoshop, but this could easily be hand drawn (or not even necessary!).  I had them use a lip gloss for the spinner and whatever color it landed on they each got a nail in that hue.  They loved ending up with a rainbow manicure in the end. 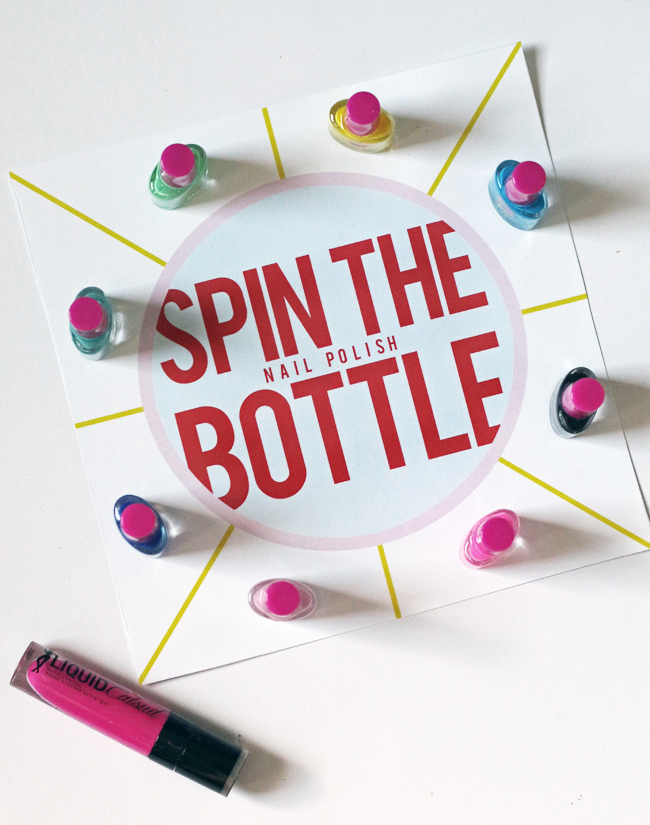 I also had them color customized pillowcases using fabric markers.  I used both of our inspirations, the napkins and the sleeping masks, and drew outlines of the junk food in black for the kids to color in at the party.  You could easily just let them go to town on a blank pillowcase, but again I may have party theme OCD and went for it. 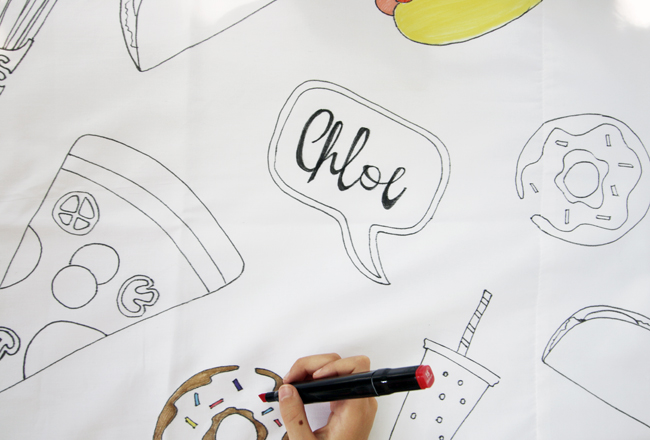 They had so much fun coloring their pillowcases and the best part was being able to sleep on them that night. 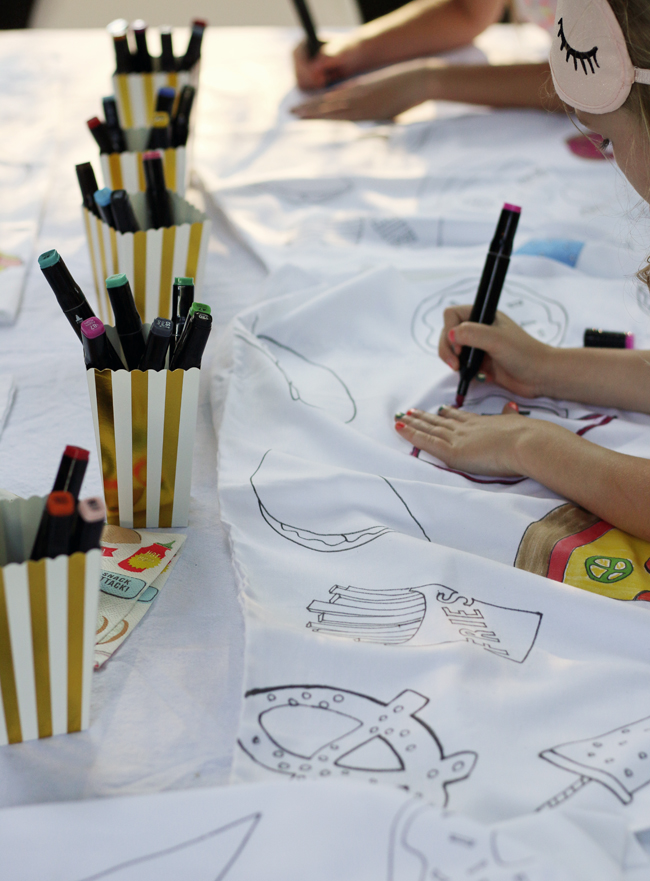 My favorite part was Spa time.  They each got a mini face mask of plain yogurt with a couple of raw oats mixed in.  I didn’t want to do anything to irritate their sweet little faces.  And while I could have used real cucumbers, I found these little freezer eye masks at the Dollar Store and couldn’t resist.  They were all giggles and kept saying “This is so relaxing dah’ling!”.  So cute. 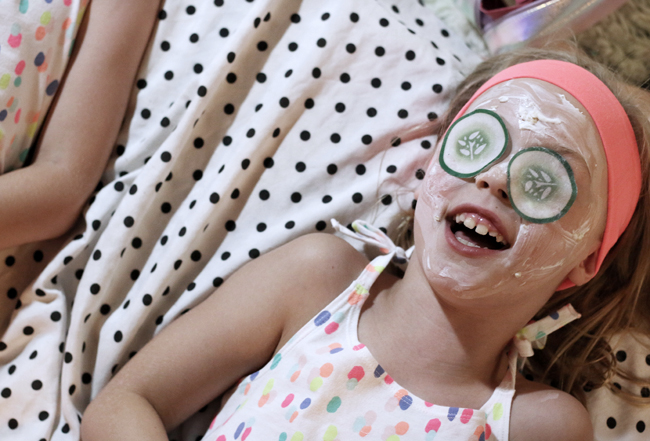 We finished off the evening with some popcorn and a movie in our transformed living room.

I covered every inch of our sofa in extra blankets and pillows and even added our tufted french mattress on the floor for another sleeping area.  The girls loved piling up together and watching the movie until they eventually fell asleep. 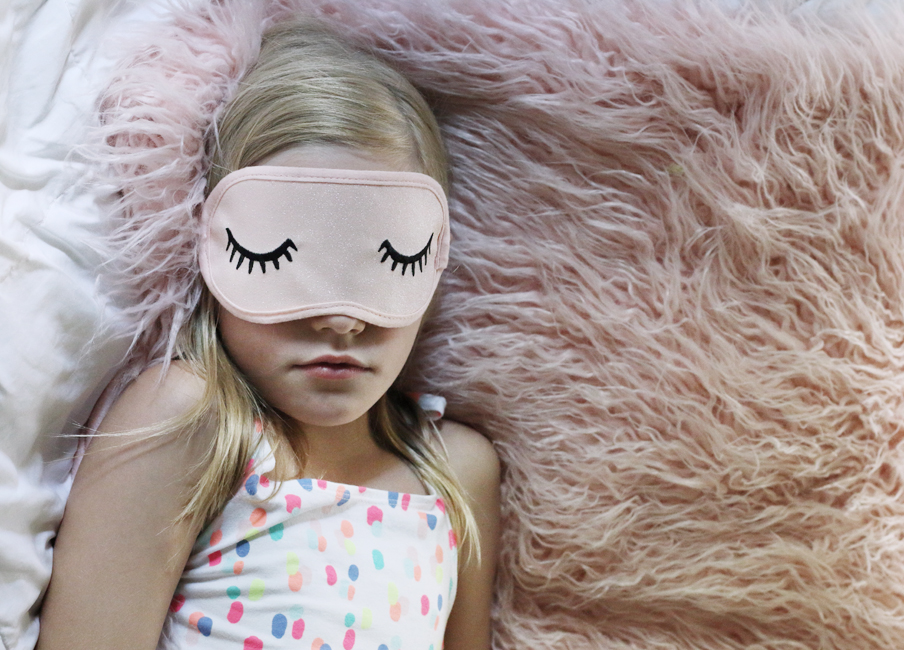 I still can’t believe she is eight years old.  But I know that this will be a party she will never forget.