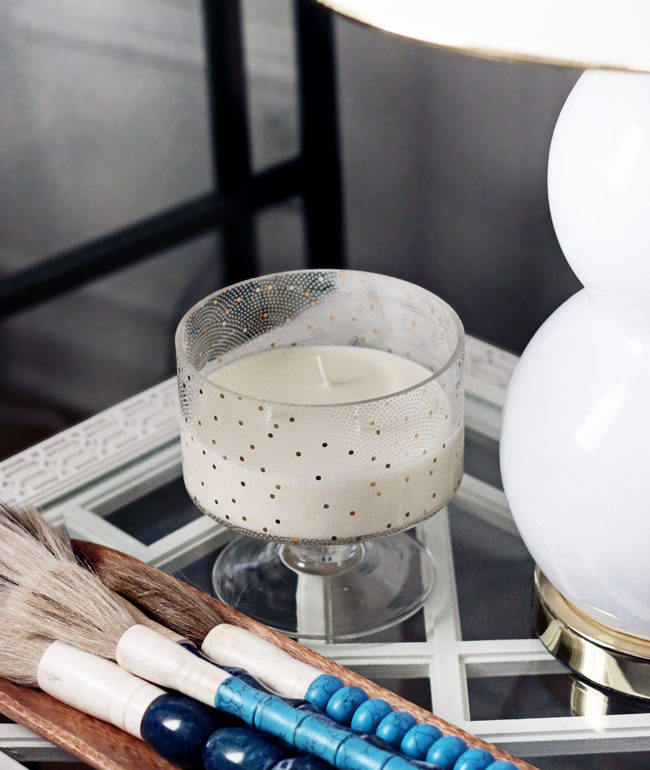 This is a post I had no intention to write, but after speaking to a few friends I quickly realized this was an issue they were having as well.  I asked if they would want to read a post like this & they said “YES!”, so here it is.  Fun fact: My favorite candle scent of all time is Capri Blue’s Volcano No. 6.  For those of you who don’t know, this is the candle that is 98% of the time burning at Anthropologie stores.  My least favorite candle is one in the same.  I have had issues burning this candle & maybe it is user error?! While the candle burns for a very long time, when the candle burns to the bottom of the wick meeting the glass bottom I am constantly left with a ring of unburned wax around the perimeter.  And not just a little wax, but a significant  amount.  And these candles are not inexpensive, which was so disappointing.  So I started saving my old candles… I just couldn’t bring myself to throw them away.

Once I had two jars that had run their course, I began an experiment.  I was going to make a new candle.  I scooped out the remaining wax with a kitchen spoon and placed it all in a stainless steel bowl.  I then placed the bowl over a sauce pan of boiling water creating a double boiler effect.  This allowed the wax to melt instead of burning.  After about five minutes or so, the wax from both candles had melted completely.

While the wax was melting I gathered up a few more materials needed.  I grabbed a glass vessel that actually was a candle from years ago.  I had cleaned the vessel out and I have been using it as a vase ever since.  I choose to reuse this vessel due to the fact that it had straight sides, hoping that this would burn more evenly.  I also pulled out some new wicks.  I ordered mine, but they can be picked up at your local craft store.  I got 100 6″ wicks for about $6… so I will be able to repeat this process just a few more times.  Ha.  My vessel was large enough that I choose to use three wicks, instead of one.  Again, I want this to burn evenly.

I carefully, repeat carefully, poured the melted wax into the vase and then positioned the three wicks.  The wicks were much longer than they needed to be, but this allowed them to lean over the glass edge and stay straight in the candle while the wax cooled.

In about an hour, I had a brand new candle.  A big candle!  And while this all sounds like a lot of work, it really was a simple process.  And one I won’t mind repeating to be able to have my favorite scent filling our home.  So now, if you too have candles that leave leftover wax, simply scrape them out and make your own.

I do want to note that when you are cleaning up, be sure not to rinse the wax down your drain.  To remove the wax from everything, I simply ran cold water over the bowl and spoon which almost instantly hardened the wax.  I was then able to wipe it off with a paper towel removing 99% of the wax.  At that point I washed them as I normally would.

Do you all have any tips to avoid the candle tunneling in the first place?!  I’d love to hear them.