ONE ROOM CHALLENGE WEEK 5 // THE SHELVES ARE UP! 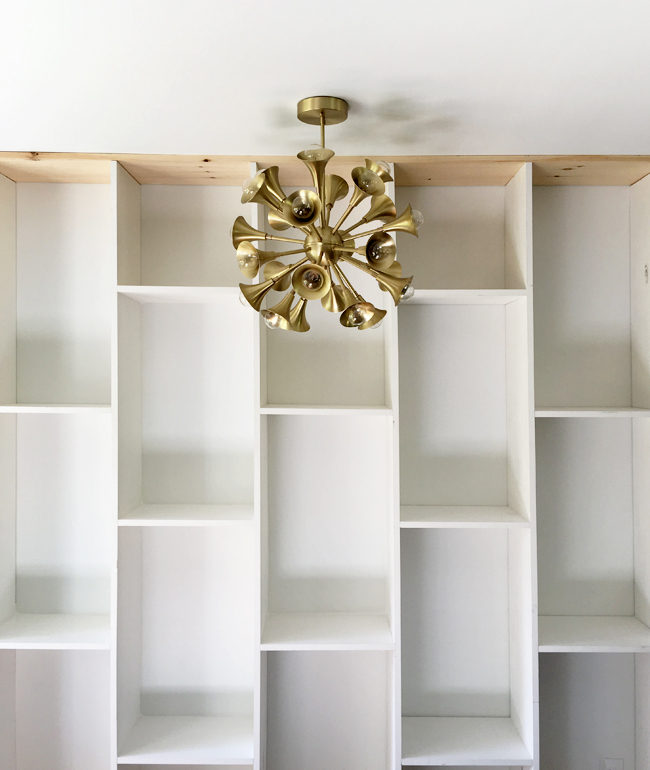 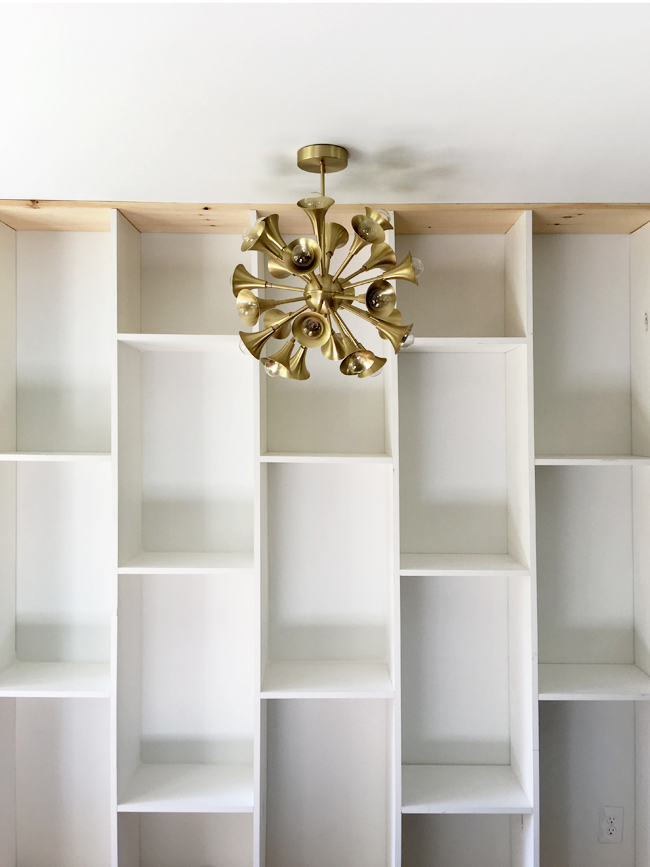 So last week I had this genius/insane idea to build a 12′ x 8′ wall of built in bookshelves with two weeks left of the One Room Challenge.  No big deal, right?! It’s only time.  Well, they are up and in record time!  And here is a breakdown as to how we went about getting them up.
I started off with a plan.  With these types of projects I have learned the hard way that a well thought out plan and purchase list are key!!  Knowing the exact amount of lumber and cuts helps on both time and money.  We ended up being $14 under budget and only had ten 9″ pieces of scrap wood left.  I consider that to be a well planned project.
I worked on numerous layouts for the shelves, but after measuring the space and working with standard widths of lumber we ended up with nine columns of shelves that are 16″ wide.  Each column then has offset shelves.  We stuck with this plan and moved forward to begin building. 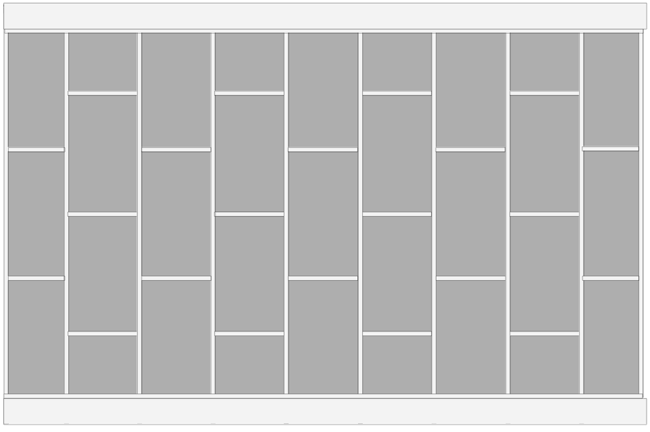 Once we had the pre primed lumber from The Home Depot, and gathered up our nail gun and radial arm saw, we began framing out the shelves.  We blocked out the height of the existing baseboard, knowing that we would be adding a final piece of matching trim to finish off the bottom. 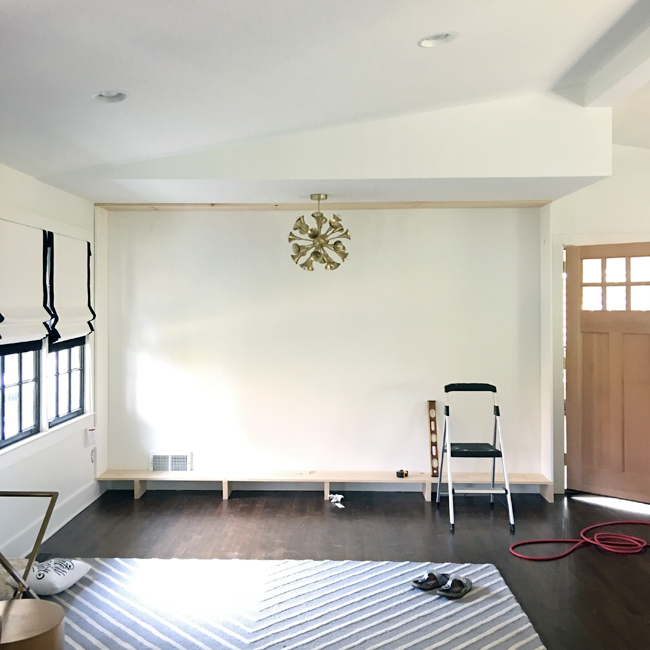 And once the exterior box was up, the vertical boards went in.  Using a nail gun, we toenailed the boards into the bottom and top of the framing checking to make sure everything was level. 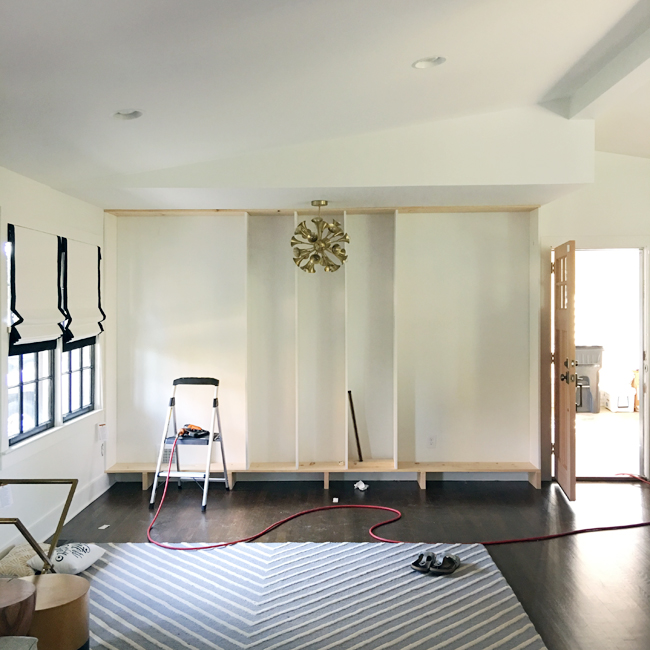 At this point all of the vertical boards were in and my husband was unexpectedly called into work.  Ummmmm, it was time to get creative as a second pair of hands would have been super helpful! 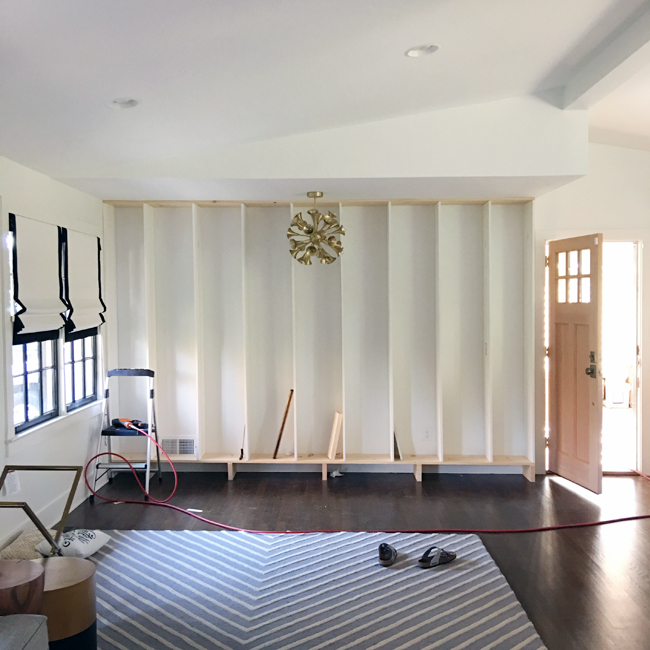 I had gone ahead and cut down all of the actual horizontal shelves and they were ready to be nailed in.  But since my second pair of hands were gone, I cut down an extra 2×4 into two supports that were the height of my shelf.  Then I simply placed these two boards onto my shelf, placed the board I needed to nail in on top and nailed it in.  This acted as a stand for my shelf and kept the board straight and level for me to attach.  It also insured each opening was the same size. 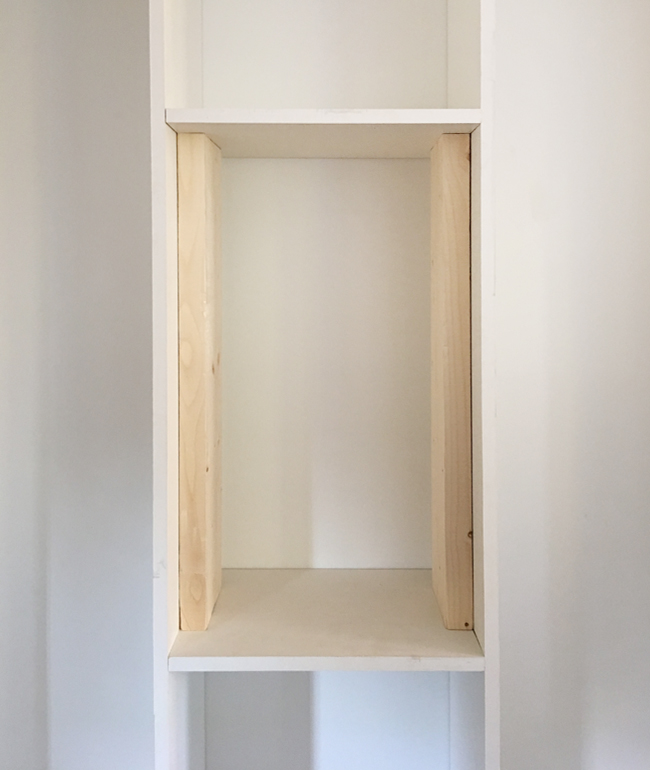 This process also made the work go pretty fast.  No need to stop and measure. 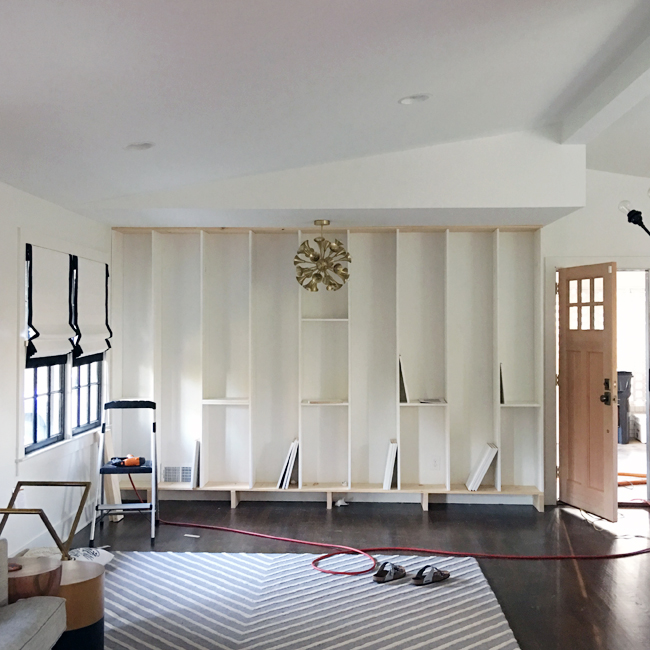 The shelves were all in and the final trim boards were attached.  Sucker was done!! And with no time to spare.  I am off to finish caulking and then paint.  I am going to leave you with a little more suspense on the color, but the Farrow & Ball cans are ready and waiting and I promise it will be dramatic! 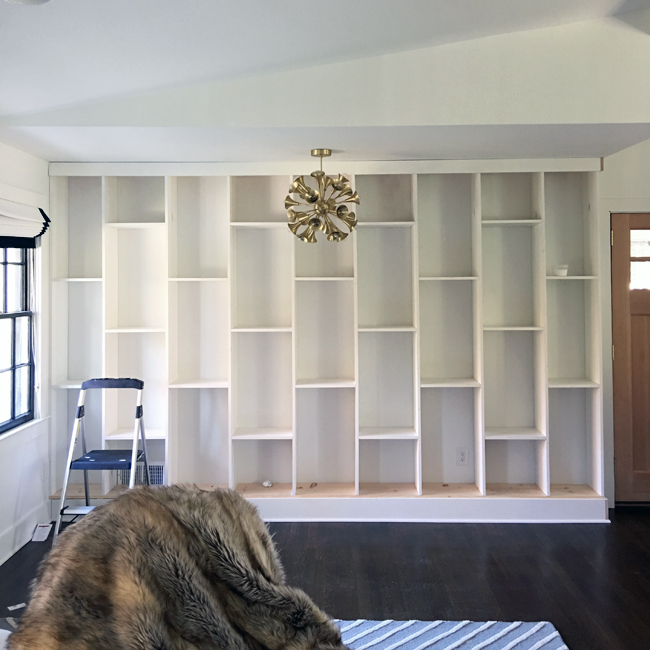 Thank you so much to my friends over at The Home Depot for helping sponsor this project.  I really think this has made this space.
Wish me luck this next week!!
T minus seven days until the final reveal and I am going to need every single minute of it!
And be sure to check out the other participants progress as well!
Jana Bek | Chris Loves Julia | Shannon Claire | Coco.Kelly | The Curated House
Driven by Décor | The English Room | From the Right Bank | Sherry Hart
Hi Sugarplum | House of Jade | Hunted Interior | The Makerista | Making it Lovely
Marcus Design | Pencil & Paper Co. | Megan Pflug | Place of My Taste | Suburban B’s
Waiting on Martha  Media Partner House Beautiful | TM by CIH
xo – Kristin