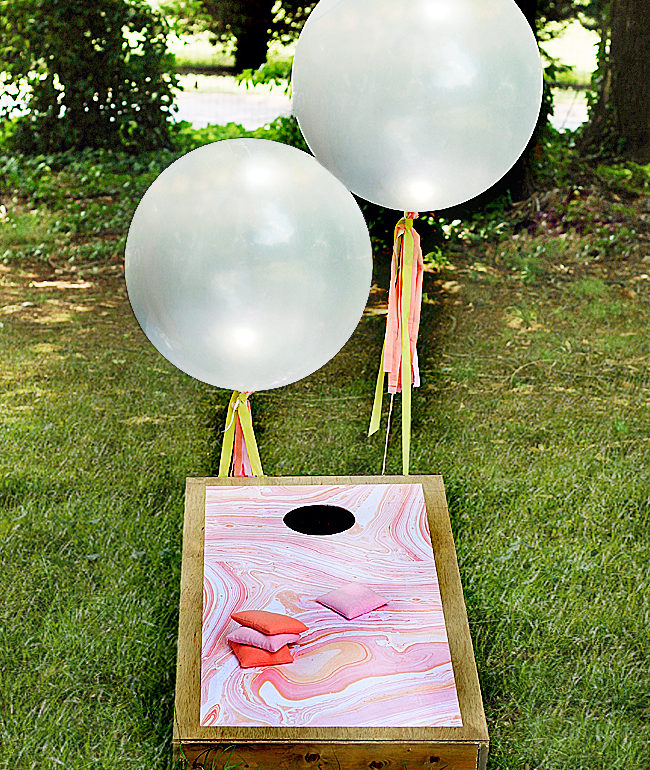 One of Chloe’s requests for her party was a Bean Bag Toss, or Corn Hole.  Being the summer of fun outdoor games in our home, we thought adding these to our arsenal of activities would be great.
Given that there are a thousand Corn Hole Tutorials out there, I won’t be reinventing the wheel.  We used this tutorial to build our boards.  The only difference was, we used 1/4″ plywood on the top instead of 3/4″.  And they still worked great, they just aren’t as heavy.
After our boards were created (we made two) & the holes were cut, I stained them using some leftover stain I had mixed for another project.  Once the stain was dry, I added the beautiful Marbelized Wrapping Paper from Minted.  I used one & a half sheets per board and attached them using wallpaper paste.  I brushed it on the back of the paper & then carefully laid it on the board leaving a bit of the wood as a border.  While drying, you may see some bubbles… most of these will dry flat.
After they paper was dry, I cut my holes using the method shown in the images above.  I adhered the radial cuts to the back using some white school glue.
To finish off my boards, I used a few thin coats of Outdoor Mod Podge.  I used this to seal them as a Polyurethane may have caused the paper to bleed… not the look I was going for.
These were finished off by the coordinating bean bags made from simple cotton fabric.
The girls had a blast playing (& climbing) on the boards.  And they were beautiful to look at.