Project Little Lady: Using What We Had 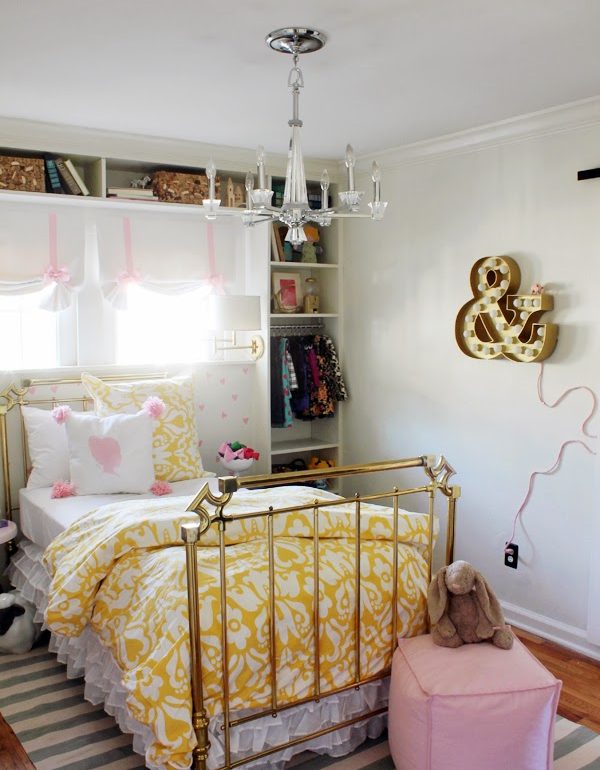 First off, thank you all for all of the kind words regarding C’s new room!!  She officially slept in it for the first time last night so we are calling the space a success.
Once again, here is a little (vague) backstory on the room switch… We are in a bit of limbo at the moment with this and I wish I could be more forthcoming with the details, but basically the watered down version is we are in need of a more permanent guest room.  It just made more sense for the potential of this need to switch Chloe’s room to the dining room.  This has caused a snowball effect of potential projects for the upcoming year so it should be fun for y’all to see.
I am not going to get all deep & stuff, but I feel like we were meant to make this switch.  As soon as we made the decision, everything fell into place.  Literally.  We dug through my hoard collection of furniture, accessories, etc… and pulled this space together with only purchasing a few building materials, a mattress set, an Ikea Rast Dresser & 1 quart of paint… and a sheep.  More on him later.   Everything else in the space for the most part was either in our home or storage already or purchased with gift cards or credits from a few of my favorite places.
First off… the layout. 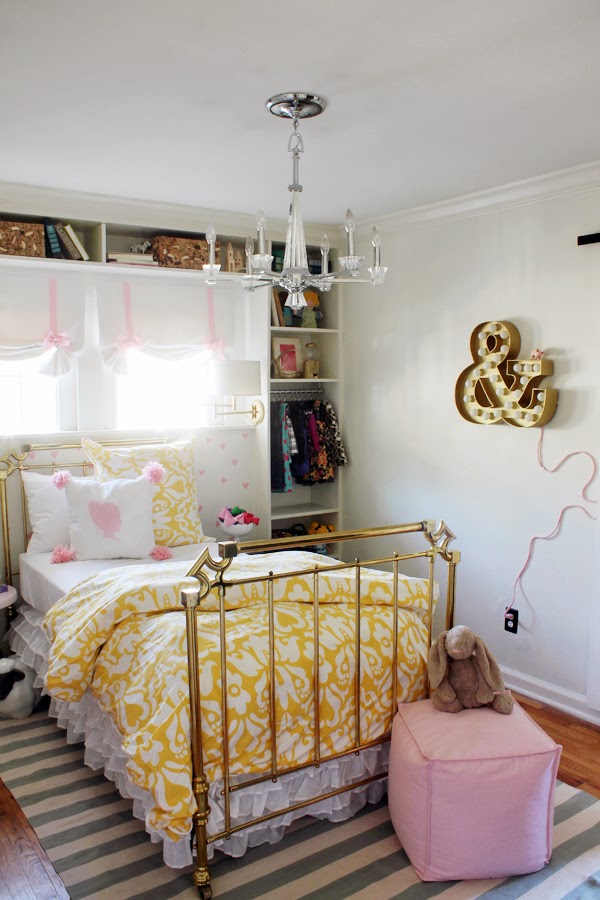 It would have been great to fit her daybed in between the built ins… but it was 4 inches too big.  It was also to big to fit on the side wall (the one with the & on it)  So luckily we were given, yes… GIVEN this gorgeous brass bed months ago.  Once the daybed was out, I knew it was time to pull this beauty out from storage.  But there again, it didn’t quite fit.  Placing on the side wall left us with about 10″in between the footboard and the “fireplace” so our only option was placing it in front of the french doors.
We discussed just draping off the doors with some curtains, but after a few long talks on the floor of the room with a cocktail or two, we ended up deciding to build a faux wall in front of the doors.  We never really used the doors anyway, and it is sooooo cold in front of those windows.  We needed to add something with some insulation.  And believe it or not, we actually had the drywall & insulation leftover from other projects.
We added this wall in a way that it isn’t going anywhere if she tries to climb the wall, we are hopeful that doesn’t happen 🙂 but we also constructed it so it can easily come down and be converted back into french doors in the future.  We framed out a shorter wall with some 2 x 4’s & drywall, added a 1×6 for the top ledge & used a few 1×6’s to frame out the windows (so you wouldn’t see the door hinges…) 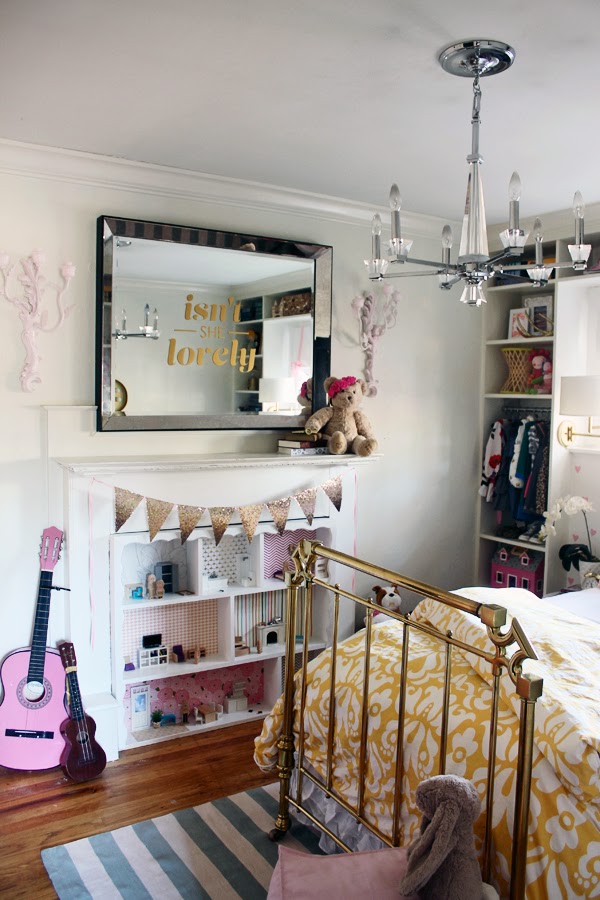 The fireplace was a similar scenario.  We LOVED the logs… but as this was such a small space, we needed every inch to count.  So we slid out the logs & I constructed the narrowest of dollhouses with some simple 1×6’s (we used a lot of those in here!) I’ll share more details about the actual dollhouse later this week.
The mirror was staying as I custom cut the mantel to fit it for our Dining Room, so I made it a little more whimsical by adding the “Isn’t She Lovely” using my Silhouette machine.  You can read about that here.  And the sconces were something I picked up nearly a year ago at an antique market.  I had zero place for them & they were bright blue… but they were $10 for the pair.  I knew I would be able to use them eventually.
The Dash & Albert Area Rug was also from our dining room.  I like how the blue and white stripes break up the sweetness of all the pink accents in the space. 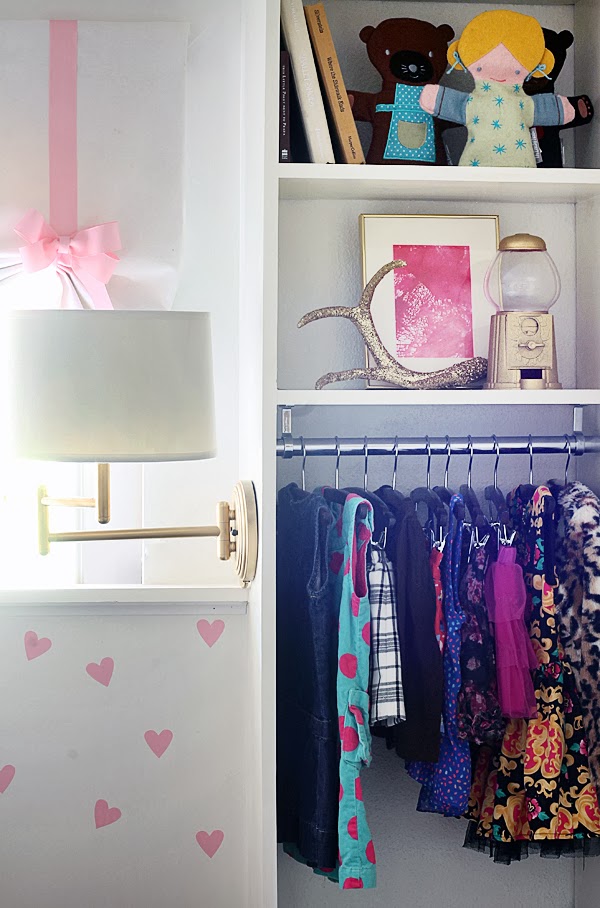 You know how I said everything just kind of fit into the space… I was literally taken aback when I took her little clothing rods from her old room & they fit like a glove into the built ins we constructed last year.  Down to the fact that one side of the built ins is a little narrower… one of our rods was a little smaller. This is a perfect solution for our lack of a closet in this space.  We still have room for her little clothes to grow & her room almost looks like a little boutique.  I did paint the back of the builtins white.  We had left the the dark navy for awhile, but it was just too much of a contrast in this space. 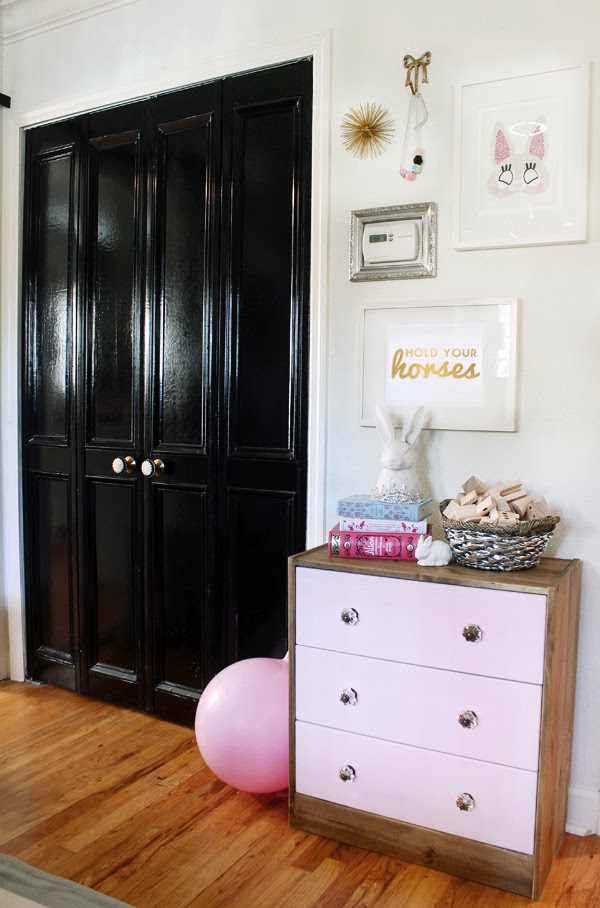 Wait Kristin, aren’t those closet doors?!!  Yes, it is our laundry closet.  So no room for Kiddo items.  And as we were in desperate need for a narrow chest of drawers, her new Ikea Rast fit the bill literally.  Size wise & budget wise.  I stained the Rast using a concoction of leftover stains we had lying around & painted the drawers using the 1 quart of paint I bought.  It’s Sherwin Williams Fancy Pink… it seemed fitting.  The knobs are from World Market. 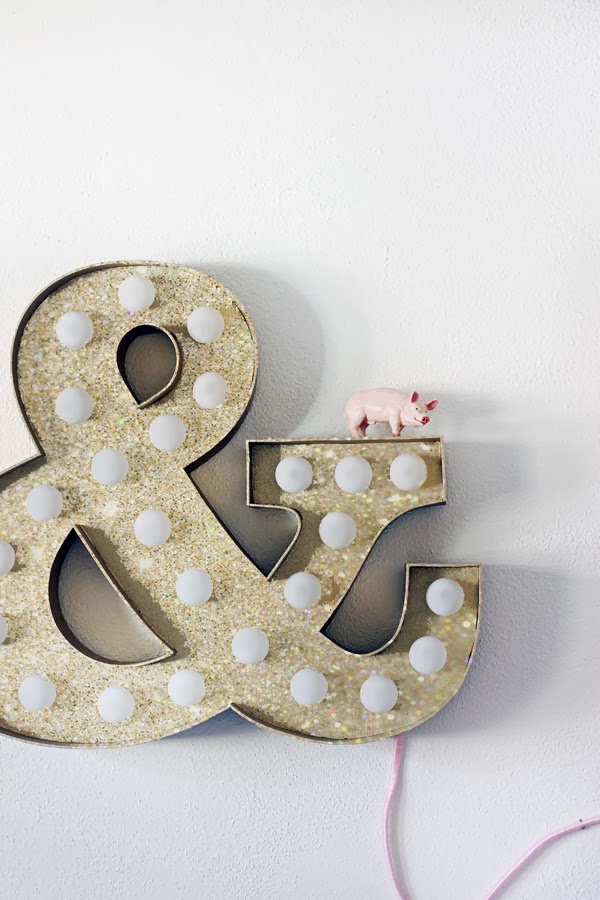 The Ampersand Marquee Light used to be on our patio, but after we shuffled that around in the fall we had no more space for the Red Letter.  I Sprayed it gold with Rustoleum Spray Paint & then used their spray glitter to give it that extra touch of sparkle.  The kid requested sparkle people. 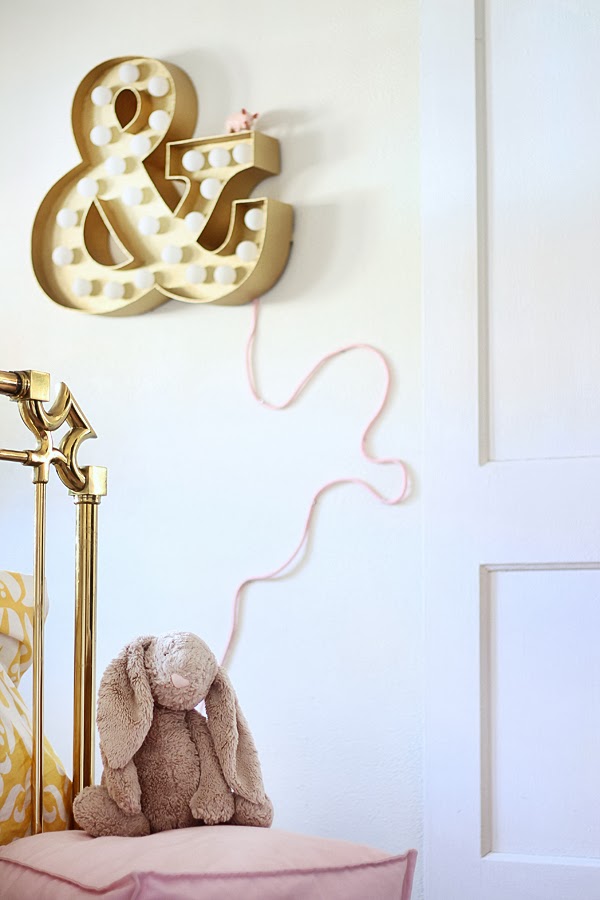 The plain extension cord was wrapped in pink yarn (that was a little tedious) & tied off at the end.  Once the entire cord was wrapped I used two little nails at each curve to sandwich the cord & direct the artistic squiggle.  It might just be my favorite thing in the space.
Tomorrow we are talking about the bedding & drapery… so stay tuned!!
x o – Kristin