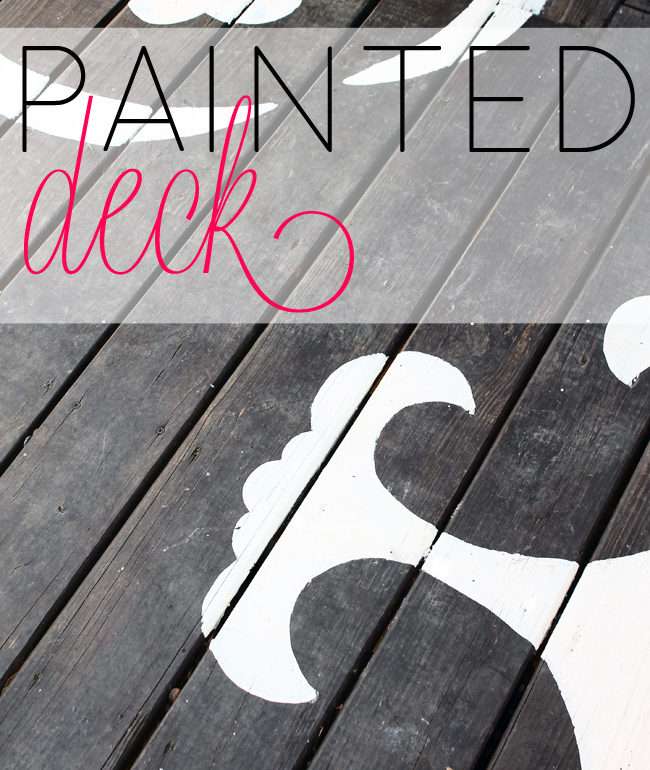 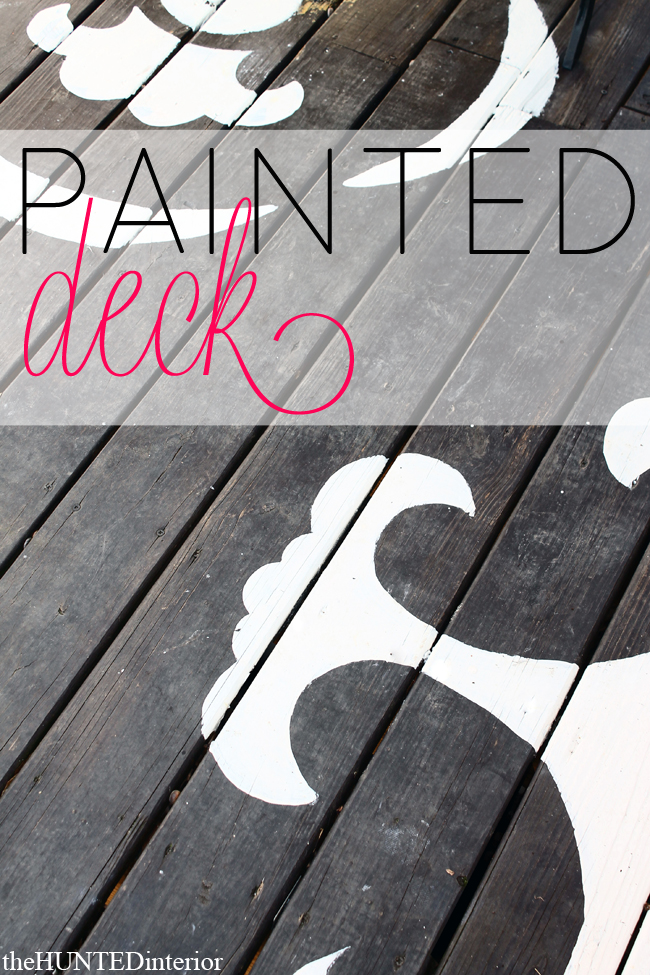 Finally!! Here are the ins & outs on how I created our stenciled floor for the Home Depot Patio Challenge this year.  There are probably a zillion different ways this could have been accomplished, but this is how I did it.
First things first… Why a painted pattern?!
We had a plain old run of the mill stained deck previously which was absolutely fine.  We had our stenciled area rug on top of that.  The rug held up like a champ!  But the only problem was, when it rained, the rug stayed wet for days.  And here in the south, during the summer, it typically showers once a day… you catching my problem.
I knew I wanted something on the floor do add some interest & once I saw this image I knew this was it!
I tired being all original & creative to come up with my own pattern, but I just kept coming back to this pattern, so why reinvent the wheel right?!?
I laid out my patterns in CAD (I have it, so I used it!) this could also be done by sketching your pattern out on some graph paper.  This helped me determine the optimum size of the motifs as well as spacing them out so there would not be a lot of awkward cutoff areas.  It also worked out perfectly that we didn’t have to paint around our Cinder Block Planter… because that puppy ain’t moving! 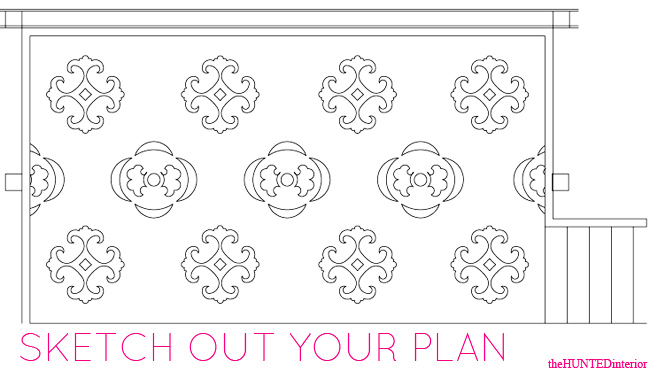 Once I had my sizes determined (roughly 40″x40″) I needed a large enough piece of cardboard to sketch the design on.  I ended up using a water heater box that conveniently died while this was going on.  I free handed the motifs on the cardboard as I liked the organic feel of the inspiration image. 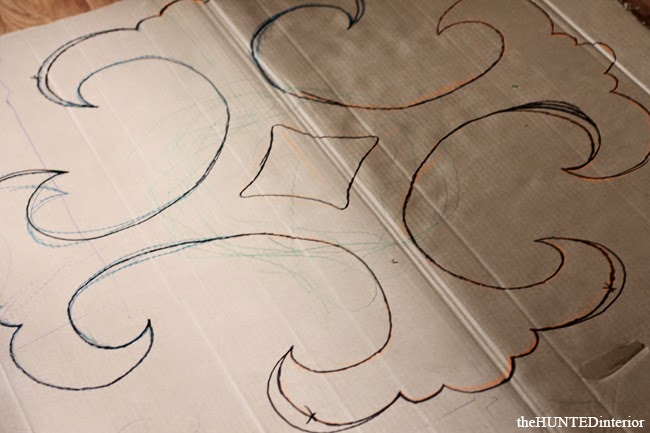 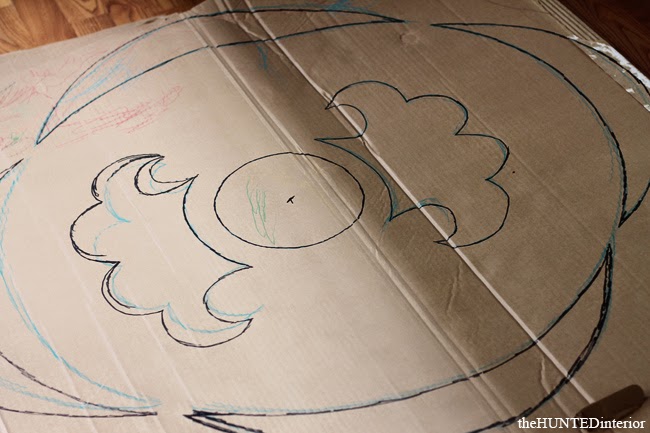 Once my motifs were drawn I cut the pattern out using a box cutter.  Ta Da!
Starting with a clean deck (aka removing as much pollen as possible!) I traced each of the motifs in place using a pencil.  I then painstakingly filled in each of them by hand using an Oil Based Porch & Floor Paint in Gloss.  This can be found at any Home Improvement store.  (It doesn’t require a primer btw!)  Due to the uneveness of the deck & all of the slats I decided this would be the way to go vs a traditional stencil… call me crazy!

Each of the motifs took two coats to get full coverage.  The second coat went on much faster than the first, but I did have to wait 24 hours between each coat… love & hate oil based paint.  Great durability! But also crazy stinky & takes forever to dry.

I literally did one or two motifs a day during nap time… So it took about two weeks to complete.  But if you have the time & better yet a partner this could easily be knocked out in a weekend. 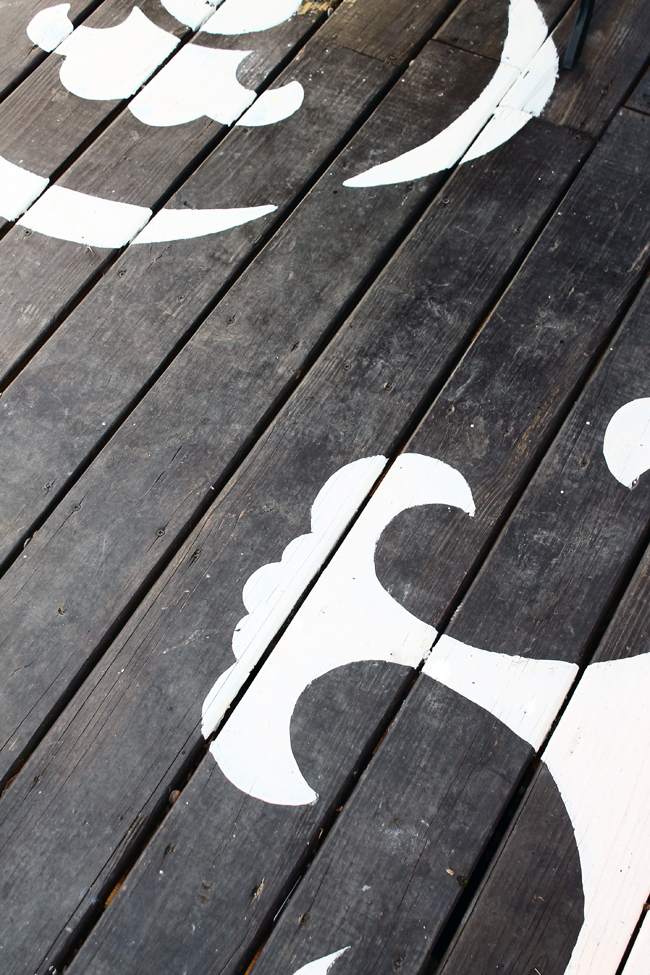 Sealer… I actually haven’t sealed it yet!  WHAT?!?!  I have been waiting for it to get a bit chippy first as that is the look I am going for.  Knowing full & well that paint on a deck is going to chip, I am letting it happen.   That being said, I am so impressed with how it has held up so far!  Through nasty rain, freezing & warm temps… so far so good.

Linked to the Outdoor Extravaganza – Painted Projects – Our Fifth House